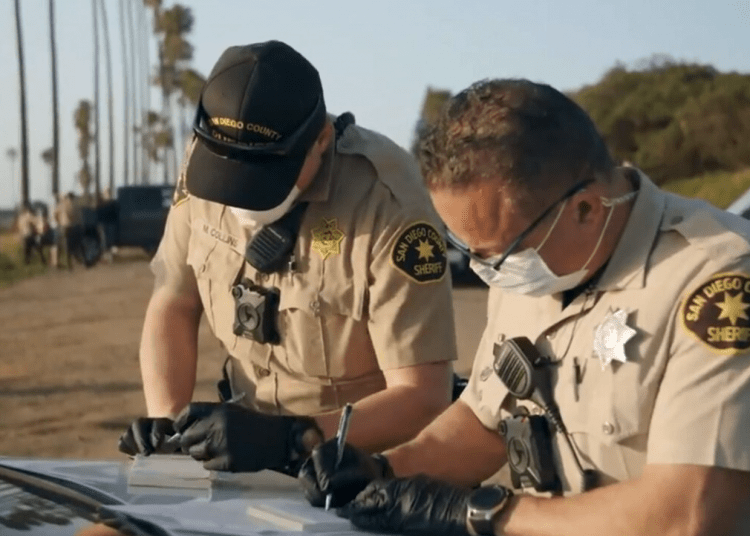 Deputies in California are giving out citations to people violating the state's stay-at-home order, which carry fines up to $1,000 or six months in jail or both. (San Diego County Sheriff's Department)

ENCINITAS, Calif. – Governor’s state-at-home orders are similarly written throughout the country. However, the manner in which they are enforced varies. Many jurisdictions simply advise citizens to comply when contacted. But in recent days law enforcement officials in California have reached for the their ticket books and handcuffs as they seek people in non-compliance.

Nearly two dozen people were issued citations at a beach on Friday for violating California’s stay-at-home order meant to slow the spread of coronavirus in the state, according to officials.

The San Diego County Sheriff’s Department said Saturday the tickets were issued to 22 people who were “watching the sunset, having picnics near the beach” in Encinitas, located 25 miles north of San Diego, Fox 5 reported.

“It’s not that we’re trying to be mean or exert unnecessary authority, we’re dealing with a crisis at this point,” Lt. Amber Baggs from the sheriff’s office said in a video released Saturday. “We want compliance from everybody because this is lives that we’re trying to save.”

The sheriff’s office tweeted that the state’s stay-at-home order means that “everyone is required to stay home except to get food, care for a relative or friend, get necessary health care, or go to an essential job.”

The violations carry fines up to $1,000 or six months in jail or both, the department said.

“This is a legally enforceable order issued under California law-Govt. Code section 8665,” the office said.

In the video released by the department, Baggs explains that over the past couple of weeks, deputies have gone out on foot and provided “physical copies of the public health order” as well as the executive order to educate community members and businesses.

Everyone is required to stay home except to get food, care for a relative or friend, get necessary health care, or go to an essential job. 22 people were cited near the beach in @EncinitasGov. Complacency is the enemy. Take #socialdistancing more seriously to stop #coronavirus. pic.twitter.com/0TkRYWwNbX

“Now, we’ve gotten to the point that we’ve had to escalate and now we’re doing enforcement,” she said.

According to Baggs, a “large group” of deputies and detectives went out on Friday and conducted enforcement for those violating the order, Fox reported.

“These were not recommendations that came down, these were actual orders that our deputies have gotten to the point now to where we will enforce and we’re going to continue to be doing enforcement,” she explained.

The sheriff’s office stressed to residents in Southern California that “complacency is the enemy,” and to take social distancing “more seriously” to stop the spread of COVID-19.

“The quicker we can shut down the spread and this pandemic, the quicker that we can all get back to a normal life,” Baggs said.

An additional three citations were issued by Sunday afternoon to individuals who were found to be in violation of stay-at-home orders, according to Fox 5.

Last week a surfer was cited in Manhattan Beach, and a paddleboarder was arrested in Malibu. Both individuals reportedly failed to heed warnings before action was taken.

Sen. Ted Cruz, R-Texas, blasted Democrat-led states for “absurd” enforcement of coronavirus stay-at-home orders in a Sunday night tweet, reacting to the story of a Pennsylvania woman who was given a $200 citation for allegedly driving alone in violation of the governor’s order, Fox News reported.

The woman, identified as 19-year-old Anita Schaffer in a story first reported by PennLive last week, was originally pulled over for a taillight violation but officers then cited her for violating a stay-at-home order from Pennsylvania Gov. Tom Wolf, a Democrat.

“This is absurd,” Cruz tweeted in reaction to the story. “To Dem politicians (and it seems to be only Dems doing this, eg Wolf in PA, DeBlasio in NYC, Cooper in NC), protect public safety, but WE DON’T LIVE IN A POLICE STATE. Resist authoritarianism & don’t abuse power. Driving a car alone is not a public health threat.”

This is absurd. To Dem politicians (and it seems to be only Dems doing this, eg Wolf in PA, DeBlasio in NYC, Cooper in NC), protect public safety, but WE DON’T LIVE IN A POLICE STATE. Resist authoritarianism & don’t abuse power. Driving a car alone is not a public health threat. https://t.co/tTNszTGNgA

California is also a Democrat run state, with Gov. Gavin Newsom at the helm.

In Sen. Cruz’ Republican run state of Texas with Gov. Greg Abbot leading the way, citizens are still allowed to go for walks, bike rides or respites in a park as long as they maintain proper social distancing and do not congregate.

“This appeals to the psychological welfare of its citizens during a difficult period of time,” said Jim McNeff, retired California police lieutenant, and current resident of Texas. “Jurisdictions taking strict enforcement of governor’s orders are walking a fine line between public health and a police state.”

The Pennsylvania citation, obtained by Fox43, says Schaffer “failed to abide by the order of the Governor and Secretary of Health issued to control the spread of a communicable disease, requiring the closure of all non-life-sustaining businesses as of 20:00 hours on March 29, 2020. To wit, defendant states that she was ‘going for a drive’ after this violation was in effect.”

“This is kind of unsettling,” she told FOX43. “I’ve had people say, you know, I just want to go out on my motorcycle and go and take a ride, and ask, ‘am I allowed to do that?'”