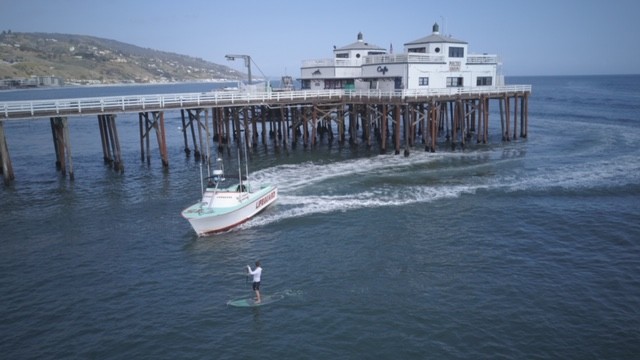 A paddleboarder was arrested after failing to obey lifeguards and violating the governor's state-at-home order. (LASD)

Lifeguards near the Malibu Pier flagged down county deputies from the Lost Hills station after they said the unidentified man ignored their orders to get out of the water, the department wrote on Facebook.

The man stayed in the water off Malibu Pier for another 30 to 40 minutes until deputies sent out a patrol boat from Marina Del Rey, KTLA reported.

Finally, he swam ashore and was arrested for disobeying lifeguards and ignoring the stay-at-home order, both misdemeanor charges.

The paddleboarder was booked into the Lost Hills Sheriff’s Station and released. He could face up to six months in jail or a $1,000 fine.

So far, the state order has not been widely enforced by police agencies, but this isn’t the first time this week a Southern California man has faced consequences for being in the ocean.

According to the Los Angeles Times, a surfer in Manhattan Beach was fined $1,000 last weekend after similarly ignoring repeated orders to exit the ocean.