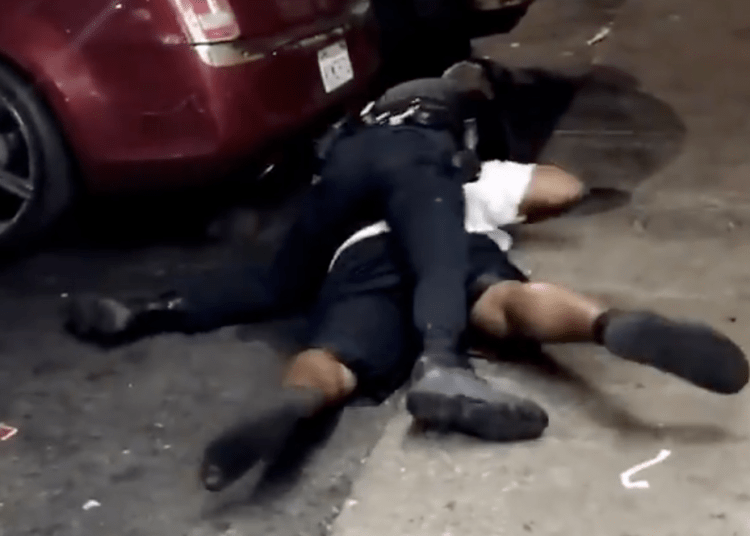 SAN BERNARDINO, Calif. — Dozens of protesters came out Friday night to demonstrate against the officer involved shooting (OIS) of a Black man in Southern California one night earlier.

The protesters in San Bernardino marched down a street, blocking traffic at an intersection near where the man was shot. They shouted slogans such as, “Abolish the police!” and “F*** the police!” according to videos on social media.

SAN BERNARDINO: Earlier BLM protesters called to “abolish the police” in unison in front of the King Tut Liquor store where Mark Matthew Bender was shot and killed by an officer after reaching for a weapon while resisting arrest pic.twitter.com/uprmdz8Fad

Cellphone video shot by a bystander captured part of the shooting in which an officer shot and killed a suspect who police say had pulled a gun from his pocket Thursday, Fox 11 reported.

Police identified the man who was shot as Mark Matthew Bender Jr., a 35-year-old San Bernardino resident. They said his lengthy rap sheet includes an arrest for attempted murder.

The department tweeted just before 9 p.m. that the protesters had moved out of the intersection.

Thank you to everyone for you cooperation and support. The protest activity at Baseline and Waterman has cleared.

Police released the video of the shooting, which is nine seconds long, on Friday.

Regarding the last Press Release we just published, here is video of the incident. The images can be graphic, therefore, Viewer Discretion is Advised. Investigation #2020-114893. pic.twitter.com/9VM3oOZNQp

As the struggle continues, Bender on the ground can be seen reaching for an item in his waistband.

As both men get back on their feet, the officer is then seen drawing his weapon and firing four shots.

The officer had responded to the liquor store for a report of a man with a gun acting erratically, jumping on top of parked vehicles, FOX 11 of Los Angeles reported.

So, let’s recap since the narrative is sure to change by anarchists, protesters, and rioters who want law enforcement abolished:

In all likelihood, the autopsy will reveal drugs in his system since everything he was doing was consistent with someone under the influence.

Regardless, protesters have taken to the streets because another suspect chose his demise at the hands of police.