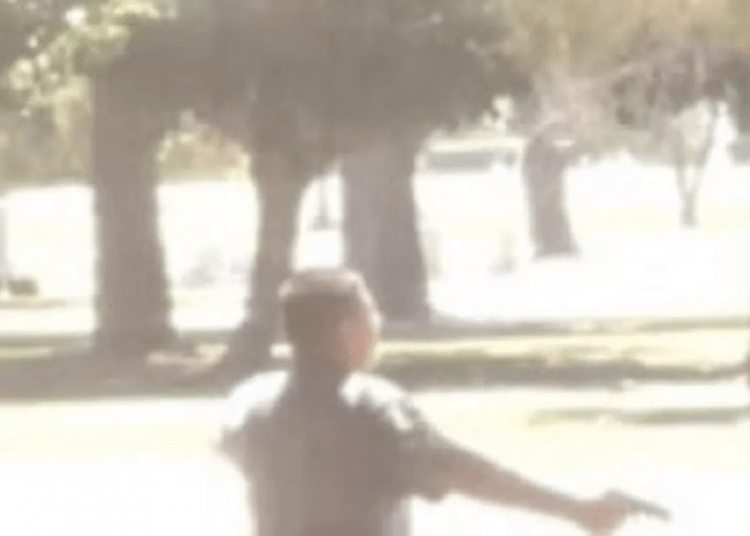 SAN BERNARDINO, Calif. – Officers from the San Bernardino Police Department shot and wounded an armed suspect during a tense confrontation in a cemetery Thursday. The teen, 13, falsely claimed to have killed three people, according to reports.

Officers were dispatched to the Pioneer Memorial Cemetery, located at 211 E. 9th Street, around 1:50 p.m. when the boy called and reported he killed three people–a claim later proven to be false, Fox 11 Los Angeles reported.

The teen reportedly told a dispatcher, “If they kill me, I’ll have to kill them,” referring to responding officers, SBPD said.

During the call to police, the boy fired several shots, according to law enforcement authorities. Bystanders were present in the cemetery, but no one was injured.

As officers arrived on scene, they discovered the male in possession of a handgun loaded with an extended magazine, according to police. Responding officers established a perimeter in the cemetery in order to contain the armed individual as well as protect the public, police confirmed.

“They prepared to make verbal contact with the suspect and negotiate his surrender,” police said. “As the officers were doing this, the suspect fired an additional shot from the gun.”

Police said the suspect refused to drop the weapon and was shot after pointing his firearm at officers, Fox reported.

After the shooting, the suspect was transported to a local hospital. His condition was not disclosed. No officers were injured during the shooting.

Afterward, detectives recovered two handguns, four additional magazines and a large haul of ammunition, although the total number of rounds was not provided. Investigators said the weapons and ammunition indicated the boy “was prepared for a prolonged confrontation.”

The teen may have been attempting “suicide by cop,”  FOX 11 reported.