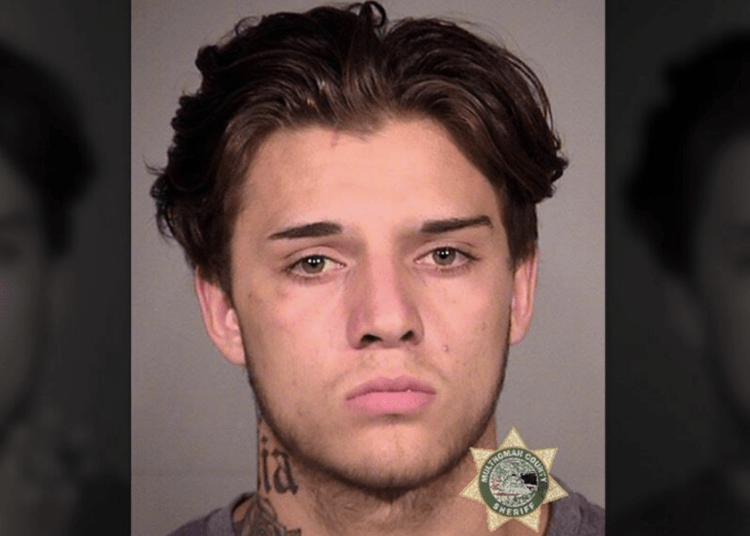 Isaiah Jason Maza, Jr., has been charged with assaulting a federal officer with a dangerous weapon and willfully damaging government property after his explosive device allegedly blasted both of a deputy U.S. Marshal’s legs, according to the U.S. Attorney’s Office in Oregon. (Multnomah County Sheriff's Office)

PORTLAND, Ore. — An 18-year-old man in Portland has been charged with assaulting a federal officer with a dangerous weapon and willfully damaging government property after his explosive device reportedly blasted both of a deputy U.S. Marshal’s legs, according to the U.S. Attorney’s Office in Oregon.

According to court documents, in the early morning hours of July 22, 2020, a group of individuals gathered in an exterior entryway of the Hatfield Federal Courthouse. Several members of the group, including Isaiah Jason Maza, Jr., began removing plywood attached to the front of the building to protect its damaged glass façade. After the group successfully removed the plywood sheeting, Maza made multiple attempts to kick in the window, struck it with a metal object, and repeatedly pounded on it with what appeared to be a hammer.

Shortly thereafter, a number of people successfully removed the entire wooden structure protecting the courthouse entryway and an unknown individual broke one of the windows. After this breach, Maza walked toward the building carrying a cylindrical object. Maza then appeared to light a fuse connected to the object and place it inside the broken window. A short time later, the object exploded in close proximity to law enforcement officers exiting the building through the broken window. A deputy U.S. Marshal sustained injuries to both his legs as a result of the blast.

On July 31, 2020, deputy U.S. Marshals spotted Maza less than one block from the courthouse. Maza ran from the deputy marshals who pursued him several blocks by foot before catching and arresting him.

Maza made his first appearance in federal court on Monday before a U.S. Magistrate Judge and was ordered detained pending further court proceedings.

This case is being jointly investigated by the FBI, the U.S. Marshals Service, and the Bureau of Alcohol, Tobacco, Firearms, and Explosives. It is being prosecuted by the U.S. Attorney’s Office for the District of Oregon.

The name of the injured deputy U.S. Marshal was not disclosed.

Portland has seen more than two months of often violent demonstrations and riots following the custodial death of George Floyd in Minneapolis. In early July, President Trump sent more federal agents to the city to protect the federal courthouse.