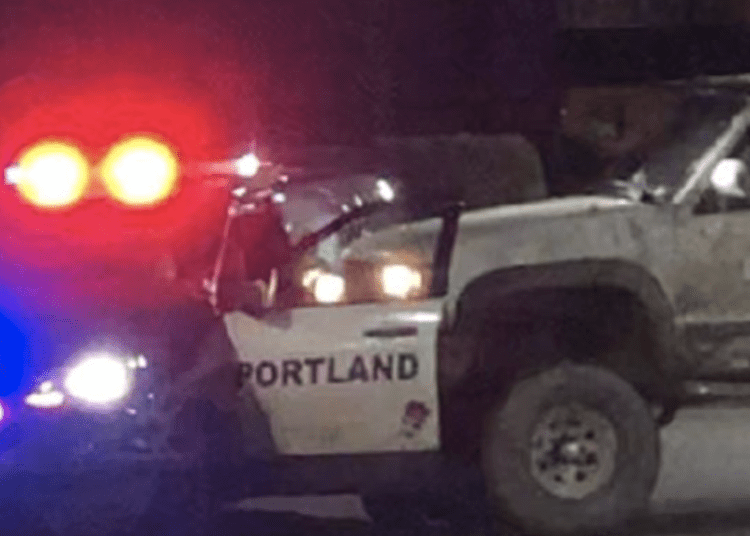 PORTLAND, Ore. — The Portland Police Bureau identified an officer hit by a stolen truck Christmas Eve as Officer Jennifer Pierce. She is a 15-year police veteran who works patrol out of Central Precinct. Pierce suffered a fractured pelvis and remains hospitalized, police said in a statement Saturday.

PPB responded to reports of a stolen pickup truck at a gas station just before 9 p.m. Thursday. When police units attempted to box in the stolen truck, the 1988 Chevrolet pickup rammed into Pierce, who was standing outside of her patrol car, pinning her between the two vehicles, according to the pickup truck’s owner.

The 42-year-old truck owner, who asked not to be named because of safety concerns, said he and his girlfriend were at the scene when the police surrounded his stolen pickup, The Oregonian reported.

The driver operating the stolen truck backed up but then drove forward again, striking Pierce a second time. Pierce then fired at the vehicle. “She fired after she was hit,” he said.

The stolen truck, which appeared to have a driver and one passenger at the time, fled the parking lot, according to police.

Pierce was rushed to a local hospital where she is undergoing treatment for the major injury of a broken pelvis.

More than an hour later, police located the stolen pickup abandoned nearby. Officers, with the help of a police K9, searched the area but didn’t locate the suspects.

According to Lt. Greg Pashley, police don’t know if anyone was struck by the officer’s gunfire since wanted individuals have not been located.

“This officer is very lucky to be alive today,” Pashley said Friday.

The pickup was stolen from a Southeast Portland auto shop on Monday. The owner and his girlfriend were finishing up holiday shopping when a friend spotted their truck on Southeast Powell Boulevard. They alerted police and arrived at the gas station when the police encounter occurred, The Oregonian reported.

A witness’ video obtained by KOIN 6 captured the stolen pickup ramming the driver’s side of a marked patrol car and pushing it forward before driving out of the gas station’s lot. The driver’s door of the police car was open at the time it was struck by the stolen truck.

One witness said he was sitting at the stop light near the gas station waiting to turn when he saw a man in a truck near the pumps with two police units pulling in behind him. The witness, Justin Dennard, said at one point he saw a man in the truck lean out backward toward the officers, and he also heard two shots.

Dennard said the person in the truck peeled out of the gas station right after the shots were fired. The truck took off toward Cesar Chavez but didn’t see where it went after that.

PPB homicide detectives are investigating this shooting. Anyone with information is asked to call PPB Detective Jen Hertzler at 503.823.1040 or Detective Travis Law at 503-.823.0395.