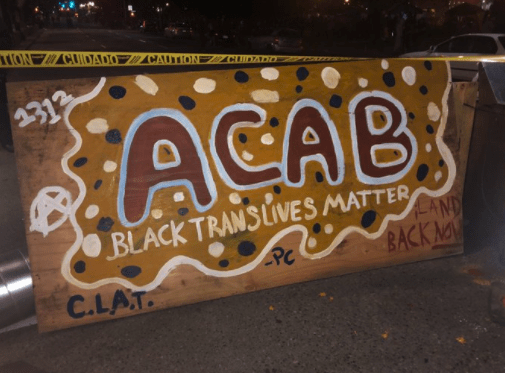 PORTLAND, Ore. — Portland protesters early Wednesday began to set up tents in the park near the federal courthouse and have barricaded streets to create their own autonomous zone, similar to the now disbanded CHOP zone in Seattle.

Demonstrators began erecting tents in downtown Portland’s Lownsdale Square, across the street from the federal Pioneer Courthouse, one of the federal properties Homeland Security is protecting after bringing federal officers into the city two weeks ago.

A camera at the Portland Standard Building showed protesters beginning to assemble tents late Tuesday night in the same park where “Occupy Portland” set up in 2011, KATU reported.

Barricade at the Chinook Land Autonomous Territory (#CLAT).
People are needed here ALL night long, especially in the early morning! Get on over rn! Bring some tents. pic.twitter.com/cP5cG77m9m

“People are needed here ALL night long, especially in the early morning! Get on over rn! Bring some tents,” the Twitter page said, sharing an image of a barricade that read “ACAB,” an acronym meaning “All Cops Are Bastards,” and “Black Trans Lives Matter.”

The Portland Police Department said in a statement early Wednesday that a “couple hundred demonstrators gathered at Revolution Hall in Southeast Portland and marched all throughout downtown Portland before ending their march at Pioneer Square” Tuesday evening.

Around 1 a.m., demonstrators “in an organized effort” left the barricades and walked to the Central Precinct “in an attempt to disrupt officers as they walked in from the end of their shift,” the police statement said. At that time, officers removed some of the barricades at Southwest 3rd Avenue and Southwest Salmon Street. But demonstrators then began returning to the area and “officers disengaged.”

Portland Mayor Ted Wheeler, a Democrat, said President Trump did not “quell” the violence and instead “escalated” tensions by deploying federal officers to Oregon’s largest city earlier this month.

Over the weekend, one demonstrator was critically injured when a federal officer fired less-lethal projectiles, striking him in the head. In a separate incident, a 23-year-old protester was arrested for attacking a federal officer with a hammer as he left a courthouse.

Referring to federal officers, Wheeler said Tuesday that “the best thing they can do is stay inside their building, or leave Portland altogether.” The mayor added that “our goal is to end these violent demonstrations quickly and safely. And in the meantime, I asked him to clean up the graffiti on local federal facilities.”

I told the Acting Secretary that my biggest immediate concern is the violence federal officers brought to our streets in recent days, and the life-threatening tactics his agents use. We do not need or want their help.

Downtown businesses have racked up millions in property damage and lost sales, and hundreds of thousands of Portland residents have stayed off the streets for six weeks.