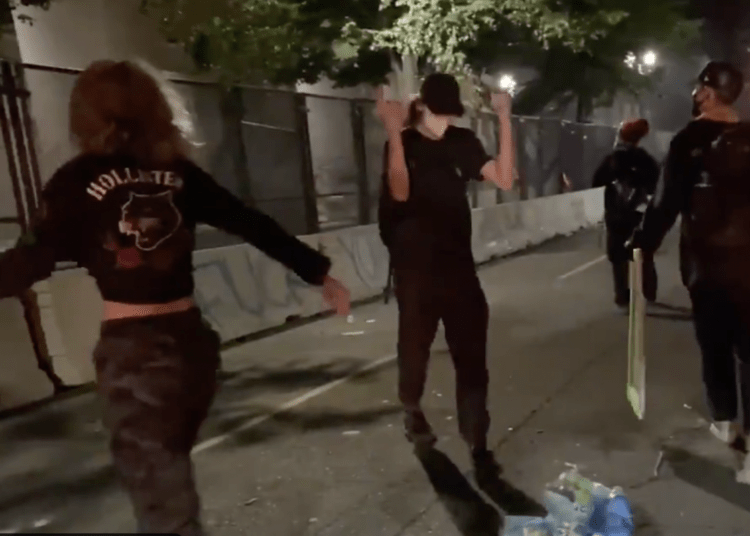 PORTLAND, Ore. — The city of Portland has the audacity to try to fine the federal government $500 for every 15 minutes it maintains unpermitted fencing outside of the federal courthouse that has faced nightly attacks amid ongoing violence and rioting.

It makes you wonder if grade school children are running the government there. I had to read this story three times to fully comprehend the absolute absurdity.

City Commissioner Chloe Eudaly said in a statement Tuesday that the fencing is obstructing the street outside of the courthouse. As of Monday, she said, the federal government owed Portland $192,000.

“We intend to collect,” said Eudaly, who added that she was “committed to doing everything in my power to end this federal occupation and move forward with our community’s reckoning with racial injustice and our efforts to transform our approach to policing and public safety.”

We are assessing the maximum fine of $500 for every 15 minutes the fence obstructs our street, & we are investigating other legal remedies. Typically, we would send a maintenance crew or contractor to remove such an obstruction, but I will not send workers into harm's way.

Last week, the Portland Bureau of Transportation, which Eudaly is in charge of, sent a cease-and-desist letter demanding that the federal government take down the fence, which was erected on Wednesday and appeared to act as a barrier between federal agents and demonstrators throwing projectiles, FOX News reported.

It makes you wonder how much they are fining the rioters for their occupation and destruction? … It’s a rhetorical question. I am fairly confident they haven’t sent a “cease-and-desist letter” to the anarchists destroying property and ruining commerce for local businesses and residents. Talk about your quality of life taking a hit!

Donated food and drink supplies to the Portland antifa riot are also used as weapons. Hundreds of bottles & cans are used as projectiles every night. Various Portland antifa groups have hundreds of thousands of dollars, keeping supply lines going. pic.twitter.com/ZQUy3AfRRB

Rioters are lighting whatever they can on fire and throwing it at the Portland federal courthouse. #PortlandRiots pic.twitter.com/2gKb3e39Q3

In her statement, Eudaly said the city had received no response to its letter.

“We are assessing the maximum fine of $500 for every 15 minutes the fence obstructs our street, and we are investigating other legal remedies available to us. Typically, we would send a maintenance crew or contractor to remove such an obstruction, but I will not send workers into harm’s way,” she said.

“Yes, I am afraid to direct workers to do their job and enforce our laws against the federal government—I hope that gives everyone reading this pause.”

Indeed it does. I am pausing as I consider what an imbecile your are!

Eudaly also suggested that the federal government was overreacting to “a few” violent demonstrators.

A few? Who is she kidding? The feds recently arrested 74 people for a variety of offenses and the herd isn’t thinning out much.

“Each and every one of you has a constitutional right to exercise your freedom of speech and to peacefully assemble,” she said. “The actions of a few should not negate these rights, and the response of law enforcement should be proportional to the infractions. Indiscriminately tear-gassing and firing impact munitions at thousands of peaceful protesters is not a proportionate response.”

Infractions? I don’t think this woman knows the difference between an infraction and a felony. If Molotov cocktails qualify as an “infraction,” we are in deep trouble.

So in the eyes of Eudaly, freedom of speech includes all manner of criminal activity. Her words do not qualify as adult logic.

Eudaly has been a prominent part of the chorus of criticism of federal agents by Portland politicians. Last week, she accused the Trump administration of “violating the constitutional rights of Portlanders … attempting to use Portland as a proving ground for fascism, and … plan[ning] to invade cities across the country, cities that are political targets of the president.”

U.S. Customs and Border Protection, which is leading the federal response in Portland, did not immediately provide a statement for this story, but I felt compelled to offer a few noteworthy editorial comments.

Feel free to offer your own below. I am certain that Law Officer readers will get creative.