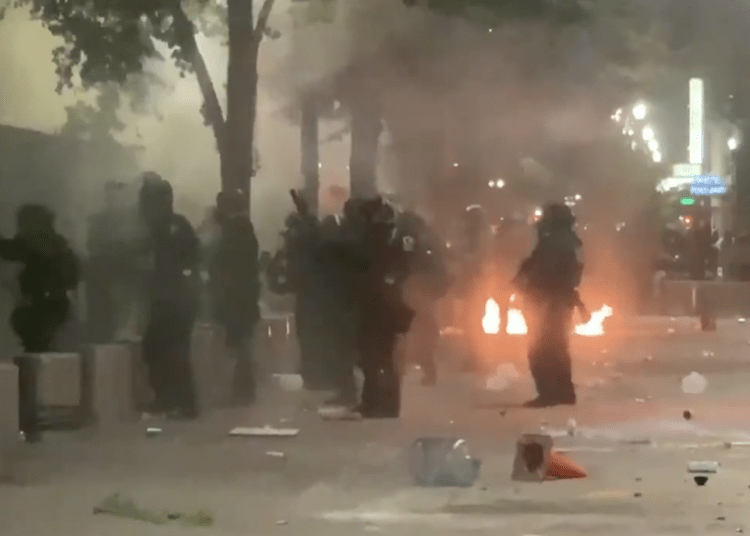 The DOJ spokeswoman made the announcement on Monday, providing the number of federal arrests and charged cases “related to violent opportunists & civil unrest.”

There have been 74 arrests in Portland alone, with 60 criminals facing charges. Nationwide, federal authorities have made 236 arrests, with 238 defendants charged, according to DOJ.

The weapons and destructive devices used by rioters have included “Molotov cocktails, Sledgehammers, Pipe bombs, Mortar fireworks, and Metal spikes,” according to DHS.

These aren’t the tools of peaceful protesters. They are tools of violent rioters looking to harm and destroy. https://t.co/2R8DK1cbaW

The Portland Police Bureau has affirmed many of the tools listed, writing as recently as July 26 that downtown protesters were equipped with “gas masks, carried shields, hockey sticks, leaf blowers, flags, and umbrellas specifically to thwart police in crowd dispersal or attempt to conceal criminal acts.”

Violent protests have continued to ravage Portland, as countless videos show demonstrators vandalizing the federal courthouse, launching mortars toward the building, setting fires in the area, and targeting officers. Rioters reportedly hurled Molotov cocktails toward federal officers over the weekend as they moved to disperse the violent crowds, Breitbart reported.

“As federal officers left the courthouse to respond to attacks on the fence last night, just like on other nights, rioters responded with hard projectiles, mortar style fireworks and lasers that can cause permanent blindness,” the DHS’s July 27 readout detailing the chaos in Portland read.

In describing one of the recent attacks, Federal Protective Service (FPS) Deputy Director of Operations Richard Cline told reporters last week, “Protesters were kicking the main doors of the courthouse and shining lasers at officers. … A  short while later the group had grown increasingly violent and aggressive, the plywood protecting the courthouse was taken down and a window was broken while protesters were attempting to breach the courthouse. Several hard objects, including canned food and glass bottles were thrown at our officers who were out to move them,” Law Officer reported.

As a result, a fence barrier was erected.

The recent DHS readout affirmed that a Molotov cocktail “was thrown over the fence,” Breitbart reported. This was also confirmed by reports via Twitter.

BREAKING: rioters throw what appeared to be a Molotov cocktail at federal agents dispersing crowds pic.twitter.com/67hJvnYEB5

Antifa rioters are throwing Molotov cocktails toward federal officers at the courthouse. Earlier in the day, police found a cache of ready-made incendiary devices and fully loaded magazines. Video by @livesmattershow. #PortlandRiots pic.twitter.com/KFPyahZ8Er

Rioters have now thrown Molotov Cocktails at the courthouse pic.twitter.com/bM5TfqcdzJ

Tonight Portland Police were near Lownsdale Square Park. A person pointed out a bag to them. Inside the bag Police found loaded rifle magazines and Molotov cocktails pic.twitter.com/ytpu9pZjqG

Mayor Ted Wheeler has maintained that Portland Police will remain relatively hands-off in quelling the unrest following the addition of federal agents and the City Council’s move to bar the department from assisting federal law enforcement.

Protesters, however, have continued to assault authorities, hurling various projectiles night after night and shining lasers into the eyes of officers.

“You’ve seen the green lasers that are being used out there. We have three officers who currently have eye injuries, and they may not recover sight in those eyes from those laser attacks,” Cline said last week.

Wheeler is joining several Democrat mayors in calling for the removal of federal agents from their respective cities.

“At the direction of the President of the United States, unidentified federal agents have been deployed to America’s cities, like Washington, D.C., Seattle, Washington, and Portland, Oregon, to interrupt local protests and impose ‘law and order’ for political purposes,” the mayors said in a joint statement to Congress, accusing Trump of “targeting and occupation of progressive cities” and calling it “unacceptable, un-American, and unconstitutional.”

Can you imagine what their demands on the federal government would be if this mess were the result of a natural disaster? They’d be looking for federal help. But since Trump’s response to ongoing violence does not align with their politics of appeasement, they whine while their cities get destroyed.

What is un-American is the fact that rioting is occurring unabated in Portland, according to one local black resident.

Gabriel Johnson, 48, a retired Marine, has been kept awake by the sounds of rioting and explosions taking place outside his window in Portland. After two months of living in fear, at 3 a.m. last Sunday he had enough.

“At that point I [had] counted 82 explosions and just thought, you know, somebody has to do something,” Johnson said, Law Officer reported.

Johnson lives only a block away from the chaos occurring at the Mark O. Hatfield U.S. Courthouse in downtown Portland. It has become the epicenter of violence, which has overtaken the city. As a result, Johnson marched into the mayhem with his American flag in hand.

Although the retired Marine knew his actions would be divisive to some, he was not prepared for the reaction he received.

“I was being called the N-word by black people. People were chasing me around with baseball bats,” Johnson said.

Among the many startling things he witnessed, one in particular shocked him the most.

“Antifa has infiltrated Black Lives Matter,” Johnson said as he described a woman dressed in Black Lives Matter gear who showed him threatening footage of protesters following him back to his home, and letting him know they were keeping tabs on him. According to Johnson, this woman was also holding an Antifa pen and was communicating with others via walkie-talkie.

“These people have nothing to do with black lives. Our black community leaders need to stand up and lead because what’s happening is they’re letting a group of terrorists that don’t represent me use me, and that’s not right,” said Johnson.

Moreover, another scene that left him distressed was seeing a 65-year-old black veteran attempt to stop the burning of Johnson’s flag, only to be beaten by alleged Black Lives Matter protesters.

“He said, ‘there’s no way you’re gonna burn this flag.’ That was followed up by Black Lives Matter, black men, running after this man, punching him in his face, grabbing the flag and throwing it over the fence,” said Johnson as he emotionally recalled the horrific incident.

Furthermore, Johnson is at least one resident who doesn’t oppose the federal assistance sent in by the Trump administration.

“In absence of the local police what do we expect?” he said. “If we as a city aren’t going to police ourselves, then we should expect someone to come in and police for us.”