Portland mayor gets scorned by protesters, tear-gassed by federal agents 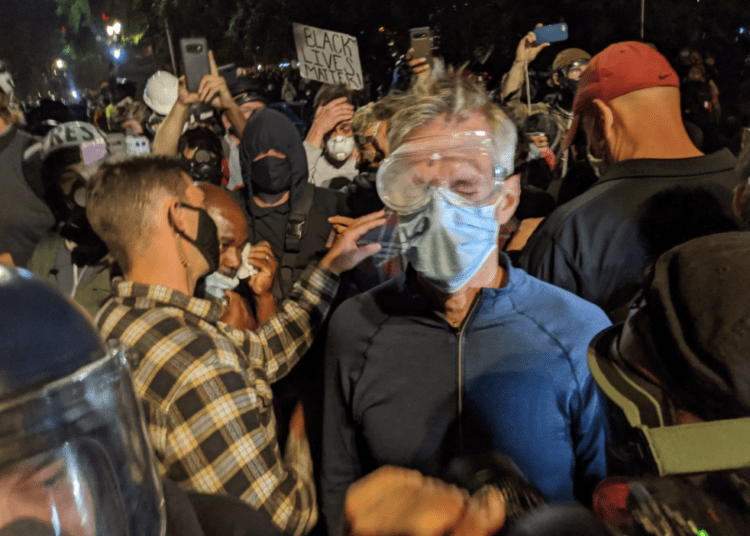 PORTLAND, Ore. — A riot was declared in Portland just after midnight Thursday morning after Mayor Ted Wheeler’s tense visit with protesters—where he was booed, told to resign, given a list of demands and tear-gassed by federal agents.

His visit ended with his security detail engaging in a struggle with protesters late Wednesday night as they worked to get the mayor to safety, a report said.

Earlier, he moved with protesters to the fence outside of the federal courthouse where he stood at the front and was tear-gassed along with the crowd, according to New York Times correspondent Mike Baker.

A riot has been declared outside the Justice Center. Disperse to the north and/or west. Disperse immediately. Failure to adhere to this order may subject you to arrest or citation, or riot control agents, including, but not limited to, tear gas and/or impact weapons.

Wheeler called the tear-gassing an “egregious overreaction,” telling Baker he didn’t see anything in the crowd that warranted the reaction by federal officers, Fox News reported.

“This is not a de-escalation strategy,” he said. “This is flat-out urban warfare and it’s being brought on this country by the president and it’s got to stop now.”

Wheeler is sticking to his policy of appeasement even though Portland is being destroyed after nearly two months of protests and riots. He fails to recognize the “urban warfare” has been initiated by anarchists.

As Wheeler left, a few protesters following him tried to push against his security team once he had entered a building. Others threw water bottles and other projectiles at the glass door, according to Baker.

"How does it feel, Teddy?" someone shouts. pic.twitter.com/4VPOKcOIII

Wheeler leaves the scene. Protesters throw water bottles at him and curse him. He manages to get inside a building after a scuffle between protesters and his security detail. pic.twitter.com/eRn2gWlpqm

Wheeler had joined protesters downtown earlier in the evening for a listening session where he thanked them for opposing the Trump administration’s “occupation” of the city in the deployment of federal agents.

“I think what we’re doing tonight is actually the best thing we can do right now,” Wheeler told hundreds in the crowd after a protester asked how to get federal officers out of the city, according to KGW-TV. “Be here, be heard, be unified, and be clear. We didn’t want them, we didn’t ask for them, they’re not trained for what they’re being asked to do. And we want them to leave.”

As Wheeler insulted federal agents, he was scorned and drowned out by calls to resign along with a chorus of boos when he told a protester that he didn’t support abolishing the police department, Fox reported.

He then addressed a much larger crowd from a raised balcony, saying “I am here tonight to stand with you.” He received some cheers when he chanted “Black lives matter!” with the crowd.

Some protesters also threw fireworks at the courthouse and tried to knock down the fencing erected outside.

Wheeler, who is also the police commissioner, has been accused by some of not reining in local police, who have used tear gas multiple times before federal agents arrived early this month in response to nearly two months of nightly protests since George Floyd was killed. Others, including business leaders, have condemned Wheeler for not bringing the situation under control before the federal agents arrived.

The mayor’s office did not immediately respond to Fox News’ request for comment.