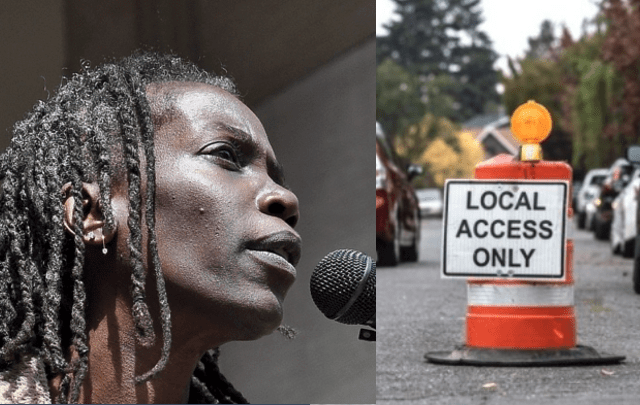 PORTLAND, Ore. – In a move that will leave clear thinking people scratching their heads, Portland officials are attempting to solve a spike in city gun violence, with traffic barrels instead of police. That is not a misprint, “traffic barrels” is the answer, according to City Commissioner Jo An Hardesty.

Hardesty, who is also a BLM activist, ordered the Portland Bureau of Transportation (PBOT) to install the barrels across a six-block area in the Mt. Scott-Arleta neighborhood which has seen an uptick in shootings, some of which have reportedly been influenced by high-speed drivers, the Portland Tribune reported.

“I’m directing PBOT to be more active and engaged in holistic solutions to community safety that can supplement police and other bureaus’ roles in this effort,” Hardesty proclaimed, according to the Post Millennial.

As a result, city workers have deployed eight traffic barrels near Southeast Woodstock Street and 72nd Avenue, and will add another 18 traffic barriers next week. Hence, we should apparently see a reduction in crime thereafter, according to Hardesty’s way of thinking.

Since last year Portland officials have placed hundreds of “local access only” barriers as part of their Slow Streets program. The purpose is to create more road space for cyclists, joggers, and walkers.

According to the Post Millennial, many have chastised the move since the city is experiencing skyrocketing homicides after police were defunded and Hardesty abolished PBB’s Gun Violence Reduction Team last year.

.@JoAnnPDX, an elected Portland official, is using her power to punish & harass a small concrete business for daring to support law enforcement. She has a history of viciously targeting working people, going so far as calling police on them. https://t.co/pTmvCAqxte

However, as homicides mount, even liberal Mayor Ted Wheeler saw the writing on the wall and proposed a new unit in March, renamed the “Focused Initiative Team,” Law Officer reported.

The once-prestigious positions on the Gun Violence Reduction Team are now considered less desirable on the new team due to the added scrutiny that comes with the role. As a result, the department was struggling to find officers willing to serve on its newly resurrected unit in August.

Hardesty remains a lighting rod of controversy. She said in July 2020 that she didn’t believe rioters in Portland were setting fires but that police were sending in “saboteurs” to create the strife, Law Officer reported. Her unsubstantiated claim drew immediate pushback from the Portland Police Bureau, which caused her to later backpedal.

The commissioner who pushed to cut funds to the police department and claimed most 911 calls were unnecessary then called 911 last November when a Lyft driver tried to cancel her ride and drop her off at a gas station due to her obnoxious behavior.

Then she attributed her actions to fear of “white supremacists.”

Most recently, Hardesty and anti-police activists tried to get a contracted city worker fired for displaying a Thin Blue Line flag decal on his truck.

You incite hatred against police to benefit your political career but in your personal life depend on them for trivial matters. https://t.co/Ns2hHVWRFi

As the Portland Police Bureau received an “unprecedented” number of officers leaving employment midcareer in 2020 to take lower-paying jobs elsewhere, “disillusionment” was primarily given as a reason for departure, Law Officer reported.

“The city council are raging idiots, in addition to being stupid. Additionally, the mayor and council ignore actual facts on crime and policing in favor of radical leftist and anarchist fantasy. What’s worse is ppb command (lt. and above) is arrogantly incompetent and cowardly.”

A year later, nothing has changed.