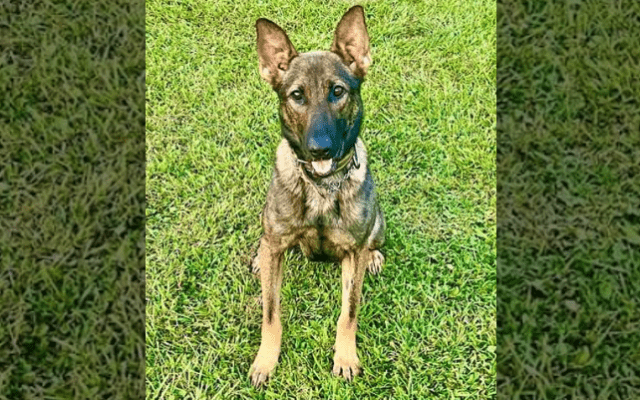 BATON ROUGE, La. — A police service dog was shot during a Tuesday night detention of four suspects traveling in a stolen truck in north Baton Rouge.

According to the Baton Rouge Police Department, the crime unfolded shortly before midnight when a handler and K9 Mack stop a suspected stolen white Dodge Ram pick-up truck.

As the two waited for assisting officers to arrive, police say the four occupants in the suspect vehicle attempted to flee on foot, WBRZ reported.

As a result, a foot chase ensued, during which Mack reportedly apprehended one of the suspects. Consequently, the suspect retaliated by firing a weapon, shooting and wounding the police service dog.

Mack was brought to the LSU Veterinary Clinic to treat his injuries. Details were not provided, but he is expected to survive.

Police say two of the suspects — Silas Clouatre, 18, and Jerell Hebert, 31 — have been arrested, while two remain outstanding. Based upon their charges, Clouatre appears to be the suspect who shot K9 Mack.

K9 Mack is a two-year-old German shepherd and has been in service with BRPD for the past year.