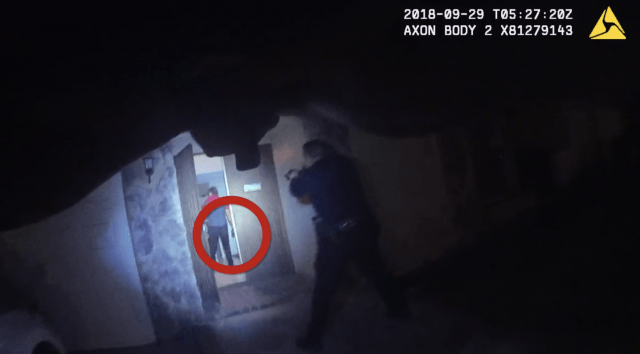 SAN BERNARDINO, Calif. – A Southern California police officer is no longer a member of the San Bernardino Police Department after a fatal shooting of a man who had been armed, but put down a weapon, before advancing toward officers. The suspect refused orders to stop as he continued walking toward police.

“Upon completion of our internal investigation and review process, we’ve concluded that one of our officer’s decision-making did not meet the standards held by our department or the community we serve,” McBride said in the video. “As a result he no longer works for the San Bernardino Police Department.”

Officer Brandon Gaddie has been identified as the officer in question. The San Bernardino Sun reports that Chief McBride did not say whether Officer Gaddie was fired or resigned.

Video shows Sanchez setting his gun down and putting his hands up as he walked toward officers. As he did so, at least one of the two officers shouted at him to stop. McBride said Sanchez didn’t stop, and Gaddie fired at him.

“Our administrative review process does not make a determination about whether the officer’s actions were lawful,” McBride said in the video. “The determination of the lawfulness of the shooting will be made by the District Attorney’s Office, which is currently reviewing the incident.”

The District Attorney’s Office received the case in December and is reviewing it.

“We will do a thorough review regarding whether or not the shooting was legally justified,” said a statement issued Friday by the DA’s Office.

Officer John Baltas was the second officer with Gaddie during the fatal encounter. He has returned to duty with SBPD.