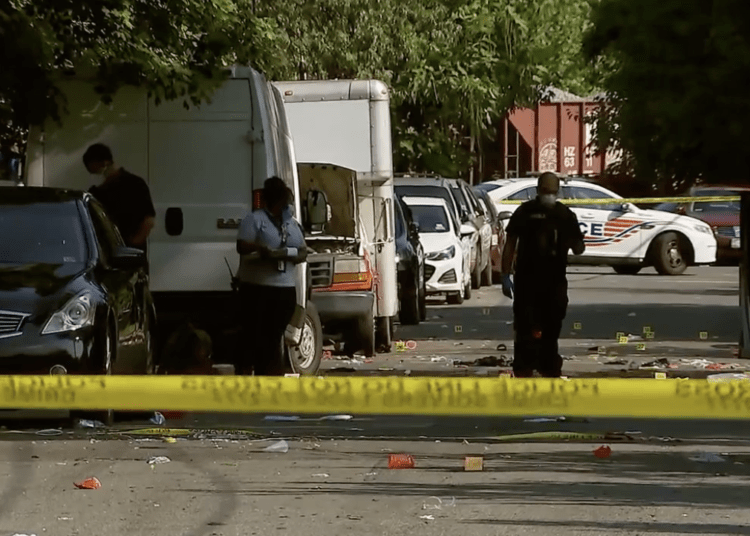 WASHINGTON — A Washington, D.C. police officer is “struggling for her life” after being shot during an early morning incident that left at least one teenager dead and dozens of others sent to the hospital, Police Chief Peter Newsham said at a press conference Sunday.

Police responded to reports of shots fired shortly before 1 a.m. in the 3300 block of Dubois Place in a residential neighborhood in southeast Washington. Newsham said there were multiple shooters and 20 people total were wounded at the scene. At least 11 of the victims were female.

Christopher “Poppy” Brown, 17, was shot and pronounced dead at a nearby hospital, Fox 5 DC reported. Moreover, a DC Metro police officer was also among the victims, Newsham told reporters at the scene.

“The second most serious victim is a First District police officer of the Metropolitan Police Department,” Newsham said. “She was shot. She is struggling for her life right now at a local hospital.”

According to the chief, the unnamed officer was off-duty at the time of the shooting, which occurred during a confrontation at a large “social gathering.”

8.9.20 Chief Newsham provides an update on shooting that occurred in the 3300 block of Dubois Place, SE pic.twitter.com/T2RWNNEHEi

The rest of the victims suffered injuries believed to be not life-threatening. At least nine people were transported to area hospitals to be treated for gunshot wounds. Other victims walked themselves to a nearby fire station and hospital after being grazed by bullets.

The gunfire erupted at a cookout with hundreds of people gathered outside, a neighbor told WUSA. Several social media posts advertised the annual “34th-n-EAT” block party to be held in the area Saturday night with bottles of alcohol and a DJ.

Newsham said a dispute broke out at the large gathering and several people produced weapons and exchanged gunfire.

“It was terrible. You had quite a few people laying on the ground, people ducking under cars,” one neighbor told WTOP.

“It was terrible. You had quite a few people laying on the ground, people ducking under cars.” Resident who heard shots ring out here along 33rd st and Dubois Pl. SE lastnight says it happened at a party that happens every year but has never turned violent @WTOP pic.twitter.com/8DwtLQevF9

More than 20 responding units, including D.C. Fire and EMS, arrived at the scene. The street was littered with bullet casings, as well as car keys and other belongings left behind by people fleeing the gunfire, Fox reported.

No arrests have been made. Police remained at the scene and continued to investigate Sunday morning.