The hill I'm willing to die on 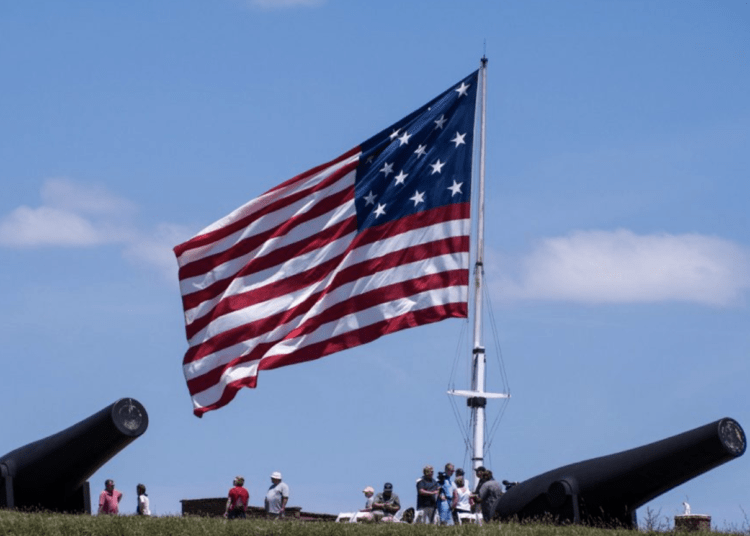 An American flag with 15 stars still flies over Fort McHenry in Baltimore, the site of the Battle of Baltimore during the War of 1812. Francis Scott Key was inspired to pen "Star Spangled Banner" after witnessing the battle. (Danny_Eugene/Flickr)

I have found the hill that I am willing to die on. My cause is the American flag. When Francis Scott key penned the Star-Spangled Banner as he observed the British bombardment of Fort McHenry in 1814 during the War of 1812, the flag became a symbol, a symbol of honor, perseverance and courage. That same flag still flies because of those attributes.

I was introduced to our flag at the age of 5 or 6. While watching the dilapidated television set that a police officer with a wife, three children, and a mortgage, could afford; when that flag was flown at the end of the broadcast, I was taught to stand and place my right hand over my heart. I was taught to respect not only that piece of cloth, but everything it symbolized.

Sixty years later, whenever I see that pennant soaring in the wind, I visualize my grandfather riding his horse while his calvary unit charged a German machinegun position in World War I. I visualize my father flying his P-47 fighter over the German skies eliminating military targets in World War II. I visualize my cousin standing his ground in the jungles of Viet Nam while surrounded and outnumbered fighting for his life and of those around him. As you see, the flag is not just a pretty piece of cloth, it is a majestic symbol.

I don’t ask much from people: all I request is a modicum of respect for a symbol that I revere, or possibly, simply the suppression of the disrespect from those individuals who hate our flag. I invite the same level of respect that they so callously demand from me. Disagreements in politics, social agendas, and religion can be discussed at a responsible level. Why can’t a person like me be afforded the same luxury as others demand from me?

Those brave souls I have mentioned, along with millions of others, have made the ultimate sacrifice. They have offered their lives to protect Old Glory and asked nothing in return. I stand with those brave men and women.

I am closer to the end of my life than the beginning. I have not a lot more to lose. This is the hill I am willing to die on to protect and defend the memories of those who have made this flag a symbol of pride, honor and freedom throughout this world.

Having had a grandfather and father on the Chicago Police Department made the choice of becoming a police officer relatively simple. Between the excitement of having a real profession and the prospect of following in the Casey footprint, the Chicago Police Department seemed a natural choice. I retired at the age of fifty-six after thirty years of a very wide variety of police work and assignments. After a few months of relaxation, I started my next career as an adjunct professor of Criminal Justice at Wilbur Wright College. I taught there for ten years and recently retired again.Trading thoughts about my police experience led me to write a book of my memories. I did not want to bore people with the typical police stories of shooting-em-ups. And seeing I was always a proponent of humor being a policeman’s best outlet for stress, I decided it was appropriate of me, to write a very different genre of police book. My compilation of short stories is based on the humorous side of police work. Honesty, it is also a base for many memories, stories that were too raw or considered too embarrassing for the everyday reader.I’m very proud to say, I teamed up with the Chicago Police Memorial Foundation and I send them a donation for every book I sell through Pay-Pal or at book signings. I have done book signings for charitable events, for police vests, local libraries, GOP sponsored events, local community events and many others.My main goal in writing was to entertain and educate the public: to show that police officers are fathers, mother, sisters and brothers, etc. We’re real people with hearts and souls. We laugh and cry like everybody else. We change tires and diapers, go to ball games and wash our cars. We’re simply human.

I Love This Country