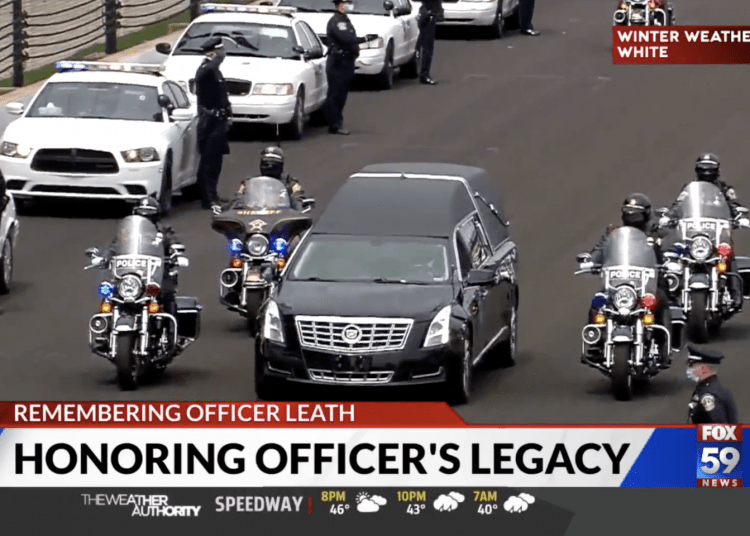 INDIANAPOLIS, Ind. — In a site where race fans gather every Month of May to salute champions, the city crowned a new hero, IMPD Officer Breann Leath who was slain while responding to a call of domestic violence last week.

The coronavirus pandemic and social distancing orders necessitated a police funeral like one never witnessed in Indianapolis. The scene included hundreds of police officers lining the famed two-and-a-half mile oval at the Indianapolis Motor Speedway, with their lights illuminated, saluting as the hearse carrying Officer Leath’s body slowly rolled past. The stands were empty, but hearts were full.

The procession was followed by an intimate funeral attended by family, IMPD leadership and clergy in a Pagoda suite overlooking the front straightway of the track, Fox 59 reported. 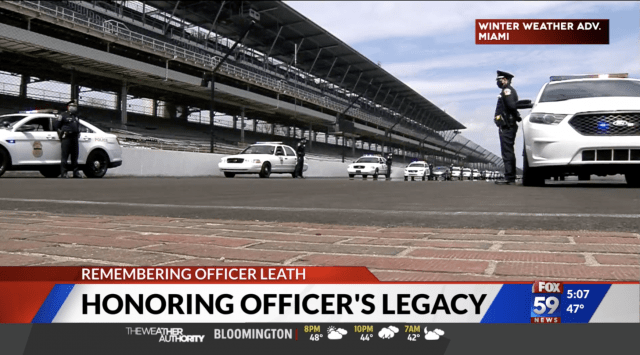 “While a global pandemic may keep us physically separated today,” Indianapolis Mayor Joe Hogsett said, “the sun rose this morning on a city that has come together as one united in admiration for our fallen hero. Here at this track and across the city her brothers and sisters in blue stand ready to keep watch over her legacy.”

Mourners shared stories of a kind and gracious officer who connected with people on her beat.

“She wrote a blank check to this community to the people that she didn’t even know, she sacrificed her own life so that others may live and that’s what makes Brea special,” said East District Lt. Michael Leeper. “That’s what makes police officers special.”

IMPD Chief Randal Taylor added, “Kindness, compassion, and generosity are the things that we as peace officers know can make a difference in the lives we touch for they are the qualities in an extraordinary person. Officer Breann Leath forever in our hearts will be remembered as extraordinary.”

IMPD Commander Richard Riddle was Officer Leath’s mentor at the IMPD Academy and later her East District commander, Fox 59 reported. He read a passage from a biography the slain officer wrote when she first entered the academy and recalled her father’s pride as he served in the Marion County Sheriff’s reserve division.

“’Eagerly I get dressed and run outside to see him sitting in his police car with the door open. As my sisters and I approach his police car, he turns the lights and sirens on. From that moment on I knew I wanted to be a police officer,’” Riddle read from the biography.

“I can assure we lost one of our best in Breann Leath.”

“I just love you so much broozy baby,” she said, her voice breaking, “and I’m gonna make you proud most definitely.”

Dr. Chris Holland, chaplain to Fraternal Order of Police Lodge #86, likened the duty of police officers to those who stand up to evil despite personal peril.

Commander Riddle announced that Officer Leath’s call sign, Baker 231, will be retired, and assured his fallen officer, “We’ll take it from here.”

Governor Eric Holcomb recalled Officer Leath’s career as a corrections officer at the Indiana Women’s Prison where a children’s nursery will be renamed in her honor.

Officer Leath is survived by a 3-year-old son named Zayn.

A memorial fund has been established to solicit funds to provide for his care. Click here to donate.