The gunman was also wounded and later captured 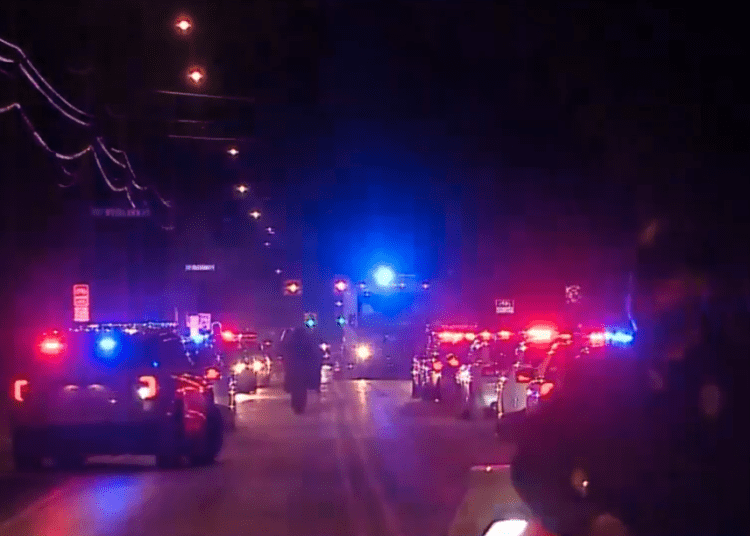 INDIANAPOLIS — An Indianapolis police officer was in serious but stable condition after engaging in a gun battle Sunday night. The gunman was also wounded during the exchange of gunfire and was initially said to be critical, but he’s been upgraded to serious condition, according to a report.

The unidentified wounded officer is new to the Indianapolis Metropolitan Police Department and is still in field training. The hospitalized suspect has not yet been identified, WISH-TV reported.

The sequence of events began when a medical crew was dispatched at 10:05 p.m. Sunday to the 1600 block of Lexington Avenue. IMPD officers were summoned about seven minutes later to a call of “accident/no info” at the same address in the Fountain Square neighborhood, which is located southeast of downtown Indianapolis.

Lt. Shane Foley from the department’s public affairs office spoke to reporters about 1:20 a.m. Monday near the crime scene.

Foley said officers responding to the scene of the collision were informed “a black man in a red jacket was exposing himself, and a male in a red vehicle was acting strangely, and the male in the red vehicle was intoxicated and was last seen southbound on State Street.”

Witnesses assisted officers locating the man in the 1600 block of Woodlawn Ave. The suspect was wearing a red jacked and in a red Buick.

As two uniformed officers in a patrol unit approached the man in an alley nearby, he fled. (It was unclear if he fled on foot or in the vehicle.) The officers ordered the suspect to stop before an exchange of gunfire occurred, WISH-TV reported.

One officer was hit by gunfire while the suspect continued to flee.

Meanwhile, a police SWAT team arrived at the scene shortly after 11 p.m. While searching the area, they found the suspect in the 900 block of Dawson Street. He sustained at least one gunshot wound. Police also found a handgun.

Medics with the SWAT team treated the gunman before EMS transported him to IU Health Methodist Hospital, according to the news outlet.

IMPD Assistant Chief Chris Bailey tweeted, “Thankful our @IMPDnews Officer is in stable condition tonight at Eskenazi Hospital after being shot. We are blessed to have brave men and women who willingly put themselves in harms way on our behalf. It’s a honor to wear the same badge. Thank you to @IFD_NEWS and @EskenaziHealth”

Foley said officers’ bodycam videos were activated and will be part of the officer-involved shooting investigation.

Rick Snyder, president of the Indianapolis Fraternal Order of Police No. 86, tweeted, “We have again been reminded of the dangers our IMPD Officers face every day while they stand the line for our community. We ask all residents to join our Indianapolis FOP in praying for this Officer, his family and fellow officers. #Prayers #ThinBlueLine.”