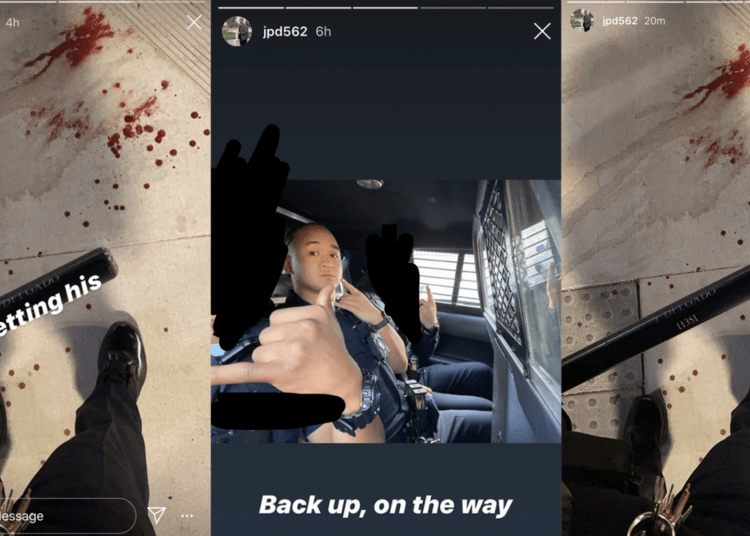 LONG BEACH, Calif. — An officer with the Long Beach Police Department in Southern California was terminated Friday for posting offensive photos on his personal social media accounts. One image depicted him holding his baton while standing over fresh blood on the pavement, officials said

The officer, who was not named by the department, “has been relieved from employment with the Long Beach Police Department,” the agency said in a written statement.

Although the agency did not list his name, he was identified by the Long Beach Post News, Buzzfeed News, and a social media post by Councilwoman Jeannine Pearce as Jacob Delgado.

“The Police Department was made aware of the photos yesterday and immediately took action,” according to the statement.

The officer was removed from patrol duties pending an internal investigation, police said. That investigation resulted in his firing on Friday, KTLA reported.

“Our organization is dedicated to our community and we must build upon the relationships we have while continuing to develop and foster new relationships,” Police Chief Robert Luna said. “We hold our employees to the highest standards and will not ignore behavior that erodes public trust.”

“The images depicted here are very disturbing and are not in line with the high standards we hold our officers accountable for,” Luna said on Thursday.

The photos were reportedly posted on Delgado’s Instagram account around 9 p.m. on May 31, according to the person who provided the photos to the Long Beach Post. This is at the same time officers were clashing with protesters in Downtown as looting began to spread across the city after the a large march in the beachside community.

The baton in the photo had Delgado’s name on it. Another Instagram account also shared the photo in Delgado’s story, adding the words, “bro getting his” on top of the baton.

“Zero tolerance for this. Don’t be silent. The culture has to change,” Councilmember Rex Richardson said on Facebook.

The controversial posts occurred as police officers across the nation were responding to massive protests and riots over the custodial death of George Floyd in Minneapolis.

Delgado had been with the department for one year.