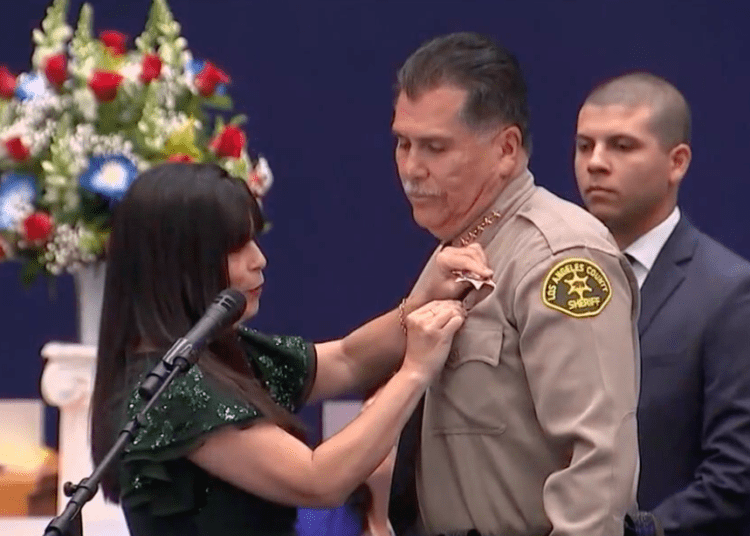 LOS ANGELES – Robert Luna traded one uniform for another as the former Long Beach police chief was sworn in Saturday as the next sheriff of Los Angeles County after defeating incumbent Alex Villanueva in November’s election.

“Today I stand before you wearing this brand-new uniform — and now I have a badge to go with it — with an incredible amount of respect, because it’s the same uniform worn by those deputies who patrolled the neighborhood where I grew up,” Luna said, adding that when he played cops and robbers as a child, he always wanted to play the good guy.

While acknowledging a rising tide of crime in Los Angeles County, he promised to be open to different approaches to tackle problems, FOX 11 Los Angeles reported.

“There can be no sacred cows,” Luna noted. He said the sheriff’s department has succeeded over the years “because it has never been afraid to innovate. … So we must look at policies and strategies that have succeeded in other places and not be afraid to bring them here.”

Luna will officially begin his sheriff duties on Monday. He said he will focus on three overriding principles:

Luna, a native of East Los Angeles, spent 36 years with the Long Beach Police Department, becoming chief in 2014, according to FOX 11. He holds a master’s degree in public administration from Cal State University Long Beach, and lives in the coastal community along with his wife. The couple have two adult children.

Los Angeles County is the most populous county in the U.S. with nearly 10 million residents.