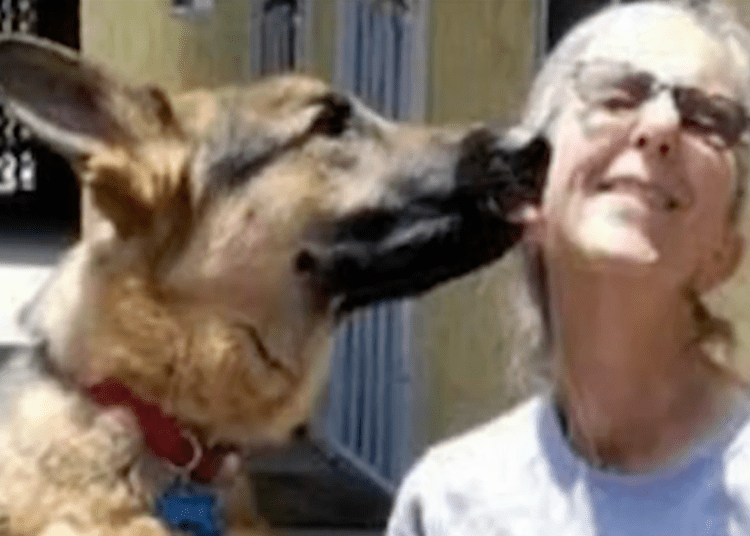 LONG BEACH, Calif. – A 66-year-old woman who is suffering from mobility issues had her service dog in training stolen from her front yard in Southern California, according to a report.

“It’s devastating and it’s heartbreaking,” the woman expressed when speaking to a reporter from KTLA.

Hartouni said she and Jack had recently completed their daily afternoon stroll when she let the GSD play in the fenced-in yard at her townhome.

“I went in to get some treats to play with him some more and he was gone,” she expressed with sorrow.

Her neighbor’s security video shows the two suspects, both dressed in black, one wearing a shirt that reads “Long Beach Certified,” dognapping Jack by placing him in a white sedan and fleeing the area.

A few weeks prior to the theft of her dog, Hartouni said a man pulled up next to her motorized scooter while she and Jack were out for a walk. The individual claimed the dog belonged to his friend.

The man then continued to slowly follow her and Jack, KTLA reported.

“I think I was watched,” Hartouni said. “He saw the dog and for some reason wanted the dog. I don’t think it was a friend’s dog. It was an excuse, a made-up story.”

With the assistance of her neighbor’s, Hartouni said flyers have been distributed seeking Jack’s return. She hopes someone knows where her companion is located and will do the right thing to get him safely back to his rightful owner. She said Jack is microchipped.

“They don’t have to give their name or number, just take him somewhere safe,” she said.

The Long Beach Police Department is investigating the crime.