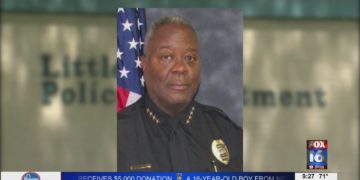 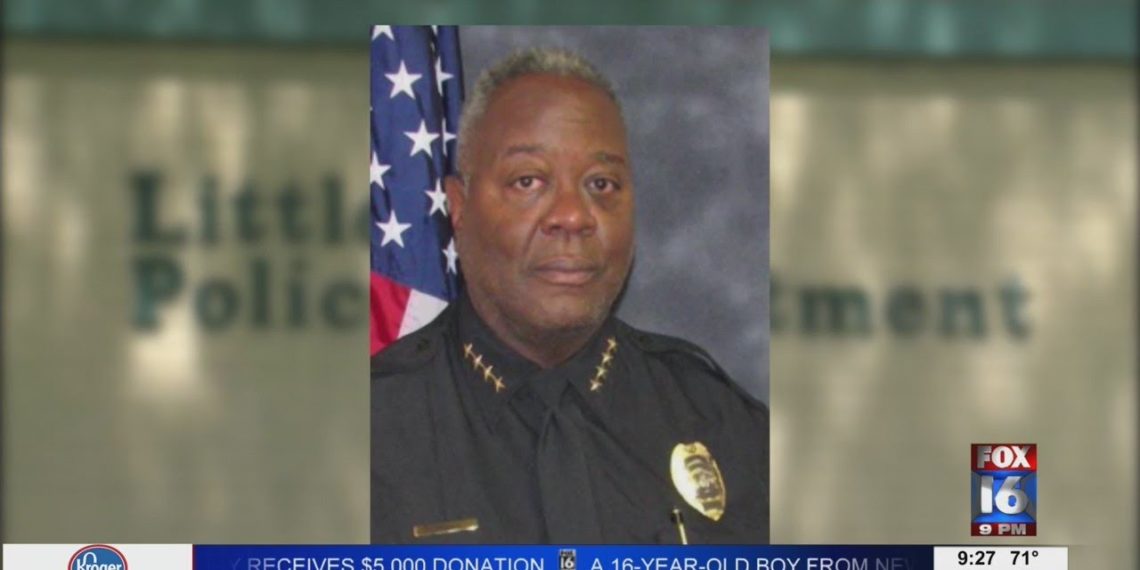 In a historic decision, the Little Rock Fraternal Order of Police has begun a no-confidence vote in the leadership of Chief Keith Humphrey.

This comes after a meeting Tuesday night where 180 members voted unanimously to send a no-confidence vote to the full membership.

The vote began immediately and will conclude on Tuesday.

According to sources, the attendance at tonight’s FOP Meeting was a record and during the motion for the no confidence vote, not one of the 180 members objected.

“It is with a heavy heart that the Little Rock Fraternal Order of Police takes this action,” said FOP President Officer Ronnie Morgan.

Morgan read a brief statement after the meeting, surrounded by officers ranking up to Assistant Chiefs of Police.

“We believe the evidence demonstrates that Chief Humphrey has consistently and intentionally acted in a manner that falls short of the basic standards of conduct required of every other officer on our force,” Morgan said.

The FOP cited concerns with Chief Humphrey that have been building for weeks. Multiple lawsuits by current officers have been filed against Chief Humphrey and city records revealed he pushed ahead a job candidate who lied on their application.

“The list of allegations against Chief Humphrey seems to grow every day,” Morgan said. “These cases range from violation of department rule, sexual harassment, and vengeful, illegal, retaliatory actions against officer, to improper contact with applicants for a department position.”

Chief Humphrey declined to comment but this afternoon, before the FOP Meeting, he sent the entire department an e-mail that stated only:  “RUMOR – Ripped Up More Organizations Repeatedly.”

The odd e-mail was taken by many on the department as a direct message related to tonight’s vote.

The FOP represents 539 members who are currently on the Little Rock Police Department, which is 95% of the agency.

Ronnie Morgan, the president of the local FOP, said, “This was not an easy decision to make but Chief
Humphrey’s behavior has left us no choice. The men and women who serve and protect our
community deserve accountable, transparent leadership that can be trusted to follow strict ethical
rules and put public safety ahead of the destructive politics of personal agendas. Chief Humphrey is
not above the law or above normal standards of ethics”

In a letter to its members, the Little Rock FOP noted:

“Evidence indicates that Chief Keith Humphrey has repeatedly misused or exceeded his authority, violated department policies, wrongfully attacked his subordinate officers, and tarnished hard-earned reputations in an attempt to evade accountability for his actions. In short, he has fallen short of the basic standards of conduct required of every other officer on our force. After exhausting other remedies, we see little progress in addressing the Chief’s behavior. So, it is with a heavy heart that the Little Rock Fraternal Order of Police Executive Board now requests your input on the question of whether you have confidence in Chief of Police Keith Humphrey to continue to lead our department.”

A Resolution of No Confidence symbolizes the belief that Police Chief Humphrey has failed the
community he is sworn to protect.

”Chief Humphrey should be held to the same, if not higher standards, than any other member of this department. It’s time for those with authority to address this situation to act. Failure to do so quickly ultimately threatens the safety and well-being of our officers and the city,” Ronnie Morgan said. 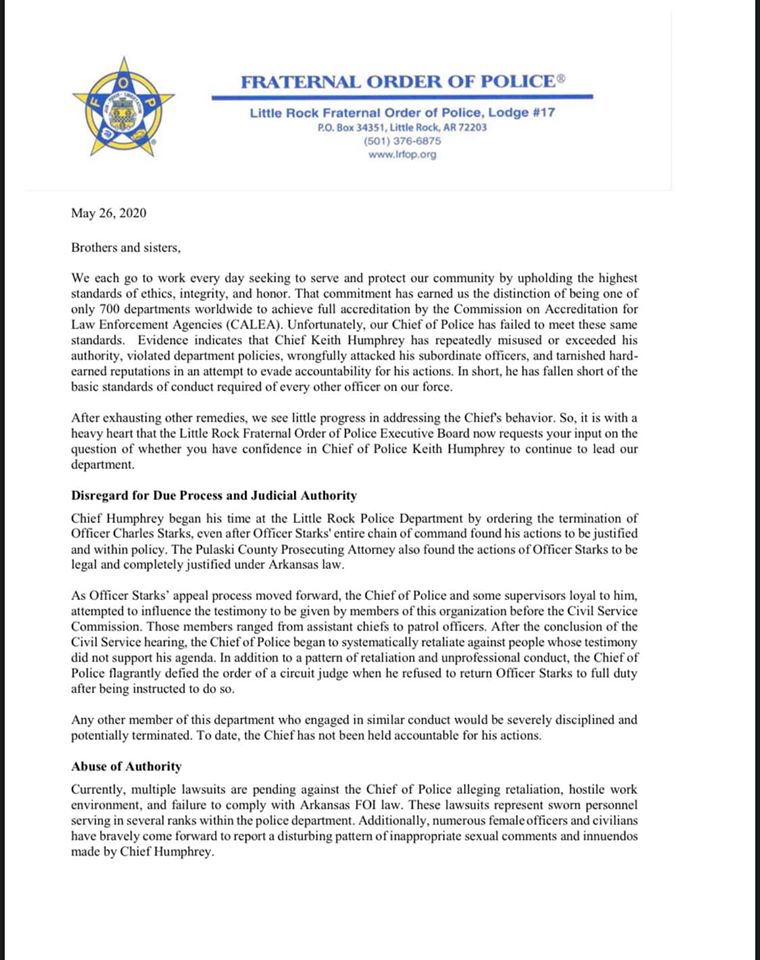 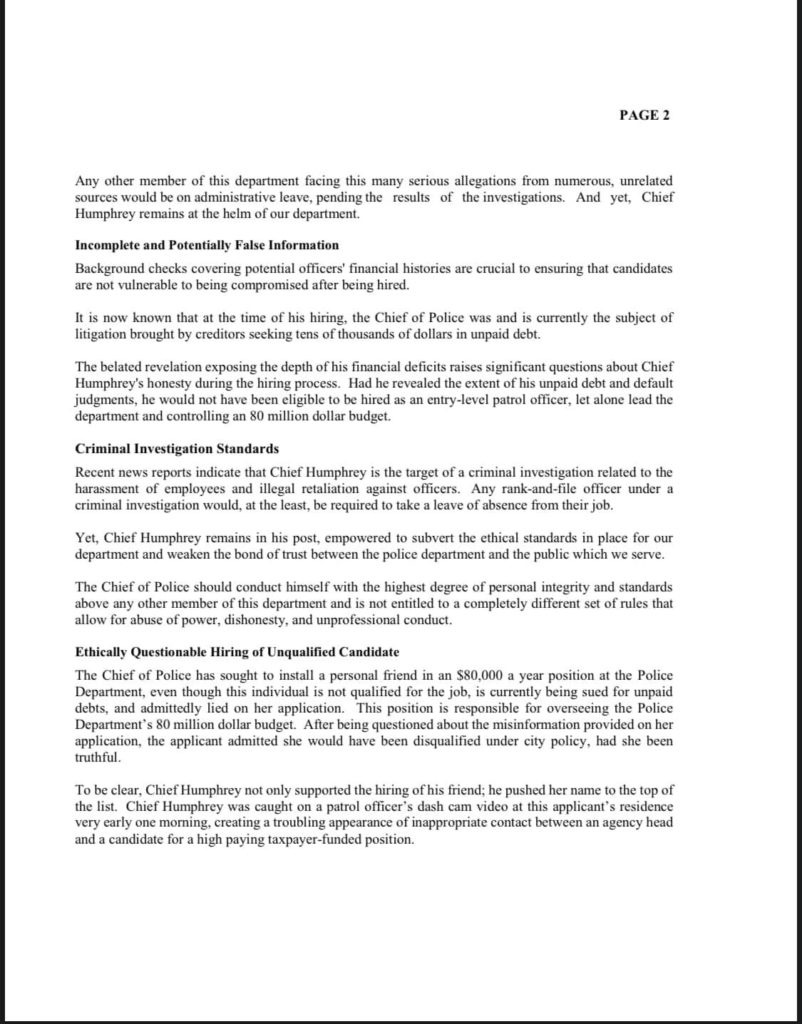 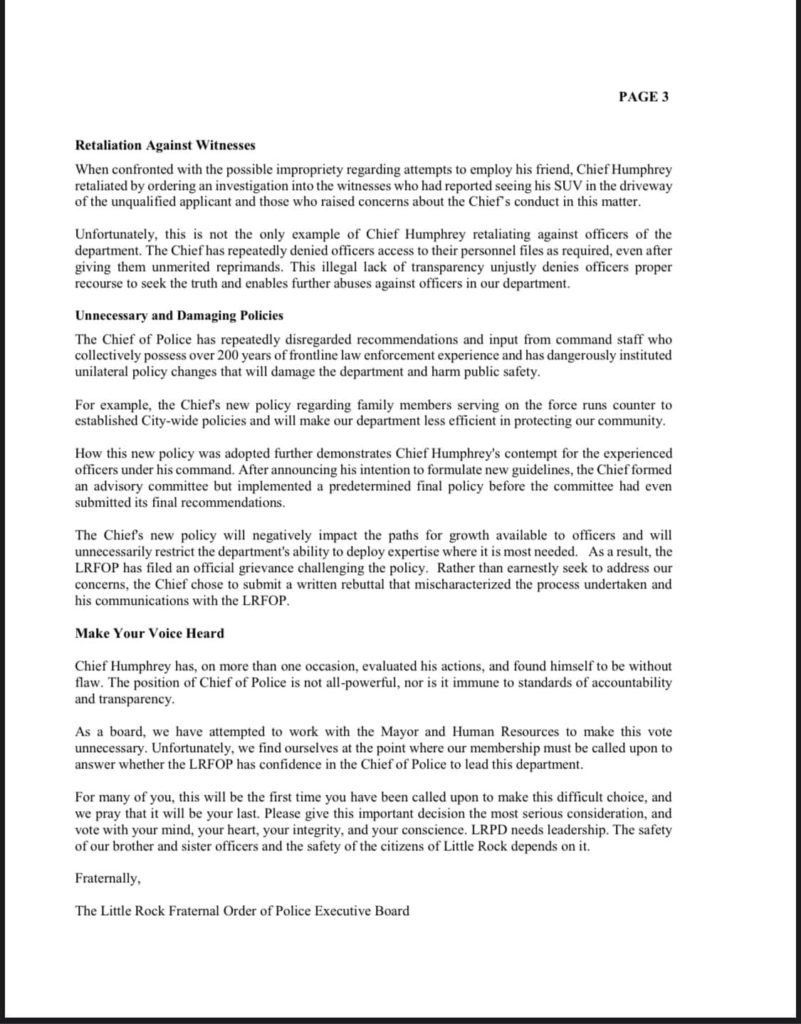