Is It Time For The Little Rock Police Chief To Go? 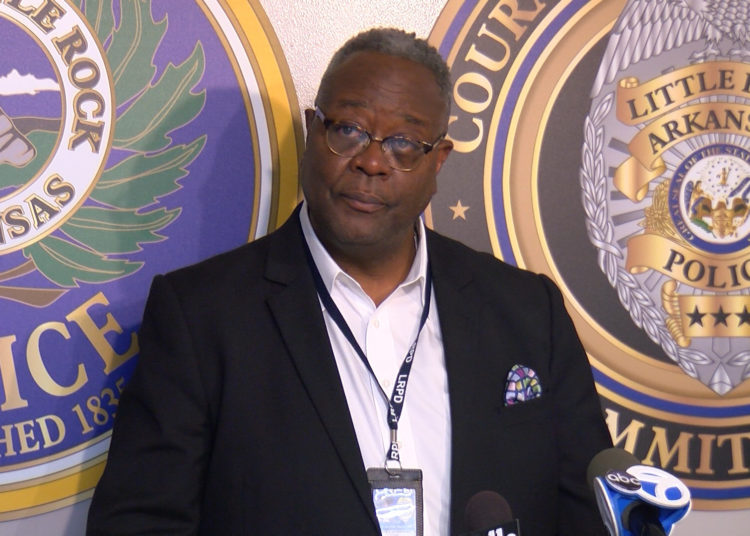 In recent months, we have told the story of Little Rock Officer Charles Starks.

The story begins on February 22, 2019, after Starks responded to a confirmed stolen car. After multiple commands, the suspect refused to stop and began driving forward when Officer Starks backed away from the car.

Despite Starks’ retreat, the left quarter panel of the car struck him. Starks did not fire on the suspect until he was struck a second time and began feeling pain in his leg and the suspect continued to drive into Starks, placing him on the hood of the moving car.

With the exception of the typical outrage that happens in any shooting of an “unarmed” minority that was using his car to attack a police officer, this was tragic in the sense that anytime a police officer is forced to use deadly force, it forever changes them.

But Officer Starks would have no idea just how horrific this incident would become.

At the time we found it odd that Keith Humphrey was the best choice for the job. There were several great candidates including a Little Rock Deputy Chief that had a proven track record of excellent leadership in the department and community. Among other great candidates, a commander from the Arkansas State Police could lead any department in the country with his hands tied behind his back.

We also had sources that had discussed with us Humphrey’s multiple attempts to gain employment in other departments prior to applying in Little Rock.

Also troubling was the process that Mayor Frank Scott used in the hiring interviews. Following the officer involved shooting by Officer Starks, he reportedly asked each chief candidate, “If you are hired, who is the first person you will fire.” In subsequent lawsuits, other candidates stated that their response was that an investigation and due process would have to be in place before any discipline was instituted. No one but two people know what Humphrey’s answer was to that question.

But ultimately, that’s why selecting a police chief is an “appointment” and qualifications are typically not up for debate.

It is what it is and it wouldn’t make sense for us to question the selection of any police chief and we did not.

That is until a few weeks into Humphrey’s job, he made one of the most horrible decisions we have ever seen by a leader….anywhere.

After the District Attorney cleared Officer Starks and every single leader in his chain of command found the shooting justified, Chief Humphrey fired him.

Cheers came from the activists. And that is all you need to know.

We’ve seen this type of shameful behavior for decades from weak leaders and it is stories like this that we often promote the Courageous Leadership Seminar and the accompanying book.

Humphries actions of what not to do would fit well into that seminar but we also know that in most cases, the truth prevails.

While that doesn’t do much for a police officer who has had their reputation ruined by the internet mob, we’d like to think this truth would encourage other cowardly leaders to either stop their behavior or leave the profession.

Indeed, after a year without a salary, Officer Starks was reinstated by a judge after he thoroughly reviewed the facts of the case but it didn’t stop there.

Humphries, in a move we have never seen before, refused to follow the judges order.

After more time and more money, a judge finally threatened the City of Little Rock with contempt if they did not follow the reinstatement order.

As we often see with evil and hatred, it’s never over and that is exactly what is happening in Little Rock.

Last week, Stark’s lawyer had to file another motion with the court because of the continued harassment of Officer Starks

Since going back to work, Starks has received one temporary assignment after another. He was assigned to training for two days then accreditation for a while and now he’s a desk officer.

There is so much more happening to him and you can read those details here. To say this is troubling is an understatement.

The trouble in Little Rock is continuing on a daily basis.

Chief Humphrey now faces multiple lawsuits including two from his own Assistant Chiefs for retaliation after they testified that his firing of Starks was inappropriate.

Another lawsuit ensued after he oddly fired Aaron Manning, a retired 23 year police veteran without any prior discipline that had taken a job in dispatch and decided to self-quarantine after another dispatcher was possibly exposed to COVID-19. The department did not require that employee to self-quarantine, which is common practice around the country, so Manning decided to use his own leave to self-quarantine.

Upon returning to work, Humphrey fired Manning saying, “It’s not personal but professional.”

At this point we vehemently disagree.  This is personal.

The careers and lives of law enforcement cannot be ruined without cause and it not be personal.

The City of Little Rock has paid out over $110,000 due to the abhorrent behavior by Chief Humphrey and there is likely much more to come.

In addition, sources indicate that there are more lawsuits coming and in our experience things are much worse at the agency considering the vast majority of officers that are negatively affected will not sue and will not make it public.

Law Officer has been a leading media company since 2005. We have published over 20,000 articles in that time and we have never seen anything like this.

All of these facts and factors have led us to a very difficult decision and an opinion about Chief Keith Humphrey and the Little Rock Police Department.

Go where you may ask? Anywhere but the Little Rock Police Department and in any police department, anywhere.

Until now, our collective opinion is that we have no business taking a stand such as this.

We are in the news and training industry. Yes, we publish editorials but this is not comfortable nor should it be.

But leadership is a bold thing and it is not for sissies or cowards and we are willing to take whatever comes our way in formulating this opinion.

In part, we are saying this now because the news out of Little Rock is not done. More is coming because of the actions of this police chief….much more.

The decision to hire Chief Humphrey lies at the feet of Mayor Frank Scott. Up until now, he has made no comment on the destruction being done to the Little Rock Police Department and the City.

We assume, he has the Chief’s back and that is why Humphrey is still employed. But as politics go, that will only last so long.

As soon as the Mayor believes that his career is in jeopardy, he will do to Chief Humphrey what Humphrey has done to others, with one exception.

The firing of Chief Humphrey will be justified.

Now, we don’t believe this is what will happen. Politicians have a knack to avoid accountability and save face.

In this case, we predict that Chief Humphrey will retire. Mayor Scott will thank him for his years of public service and for his remarkable work in the department…..

An undisclosed payout will be given to Chief Humphrey. How much you ask?

However much it takes to make sure that Humphrey never utters a negative word about the Mayor or what was said between the two in that initial job interview.

Regardless of how it happens, it needs to happen.

It needs to happen for the benefit of the Little Rock Police Department, the City of Little Rock and for the entire law enforcement profession.