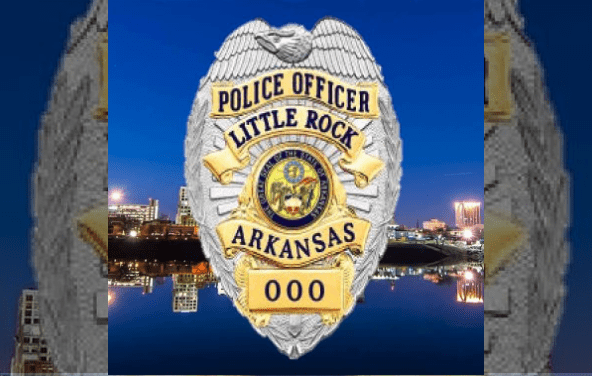 A Little Rock police officer was involved in a fatal shooting with a suspect who was trying to evade authorities in a stolen vehicle. The officer was later fired by his agency, then subsequently reinstated by a judge, even though the city fought reinstatement. However, he is now experiencing a hostile work environment created by the chief who originally tried to fire him, according to sources.

In January an Arkansas judge said he would not stay his order reinstating a Little Rock police officer fired for fatally shooting a man, although that is exactly what the city desired.

Pulaski County Circuit Judge Tim Fox denied the city of Little Rock’s request to stay his order regarding Officer Charles Starks, who was fired over the fatal shooting of Bradley Blackshire.

Starks was responding to a call Feb. 22, 2019 after a detective confirmed that the car Blackshire was driving was stolen. Due to circumstances—crazy things happen in police work—Starks found himself in a vulnerable position, with weapon drawn, ordering the suspect out of the car. But Blackshire refused to comply on multiple occasions.

When the vehicle being operated by Blackshire began to move toward Starks, he backed away. Nevertheless, the left front quarter panel struck him. Starks did not fire until he was hit a second time by Blackshire and felt pain in his leg upon being struck. Moreover, the vehicle continued to turn toward and drive into Starks.

Consequently, as the continuing action unfolds, Starks is laid out on the hood of the vehicle. As a result, he continued to fire until the suspect was no longer a threat.

Starks’ return to work has been anything but pleasant as the city continues to appeal his termination, sources have confirmed with Law Officer.

The once terminated, now judicially reinstated officer was assigned to the 12th Street desk, which is commonly known as the worst area of town. According to sources, this wouldn’t be a big deal, expect the captain responsible for the area is testifying against Starks in federal court. Moreover, she openly said the shooting was “unjustifiable” in her shooting review board findings. When the board was interviewed by Starks’ legal counsel, they disagreed with the captain, according to sources. As a result, they demanded the chief open an investigation for her untruthfulness.

The chief refused. Furthermore, he not only refused, but said the wording of the memo would never be changed. Now, according to our sources, Starks’s anticipates that someone will take further action against him. (See sections 8 -11 and 17 of the motion below.)

The termination appeared to be pure politics. Each person in Starks’ chain of command—from sergeant to assistant chief—disagreed with the decision to terminate him. Nevertheless, Chief Keith Humphrey fired Starks for violating General Order 303. II.E.2, which says, “Officers will not voluntarily place themselves in a position in front of an oncoming vehicle, where deadly force is the probable outcome. When confronted by an oncoming vehicle, officers will move out of its path, if possible, rather than fire at the vehicle.”

Beyond his chain of command, the prosecutor deemed the shooting to be legally justified, and the judge ordered reinstatement after a thorough review of the facts in addition to the cumulative expert opinions of those involved in the case. So what else can it be if it’s not politics? It certainly isn’t sound judgment!

Starks was cleared by District Attorney Larry Jegley, according to court documents. Jegley found Starks’ “actions to be lawful and his shooting of Mr. Blackshire justified under Arkansas law. Additionally under Federal and State Law the actions were clearly civilly justified.”

Another aspect reflecting a hostile work environment will reportedly come to pass in June, when Starks is scheduled to report directly to a lieutenant that he’s previously filed complaints against, charging racism. (See section 16 of the motion below.)

Perhaps “flogged” is overly descriptive, but in a professional sense, it fits. Starks was a valued member of the Little Rock Police Department prior to the justified, … yes, “justified” shooting. I could easily line up 100 or more use of force experts that would argue this to be a justified shooting, and I’d be at the front of the line. Since the fatal shooting, which is traumatic enough, Starks has been fired, reinstated, witnessed the city fight reinstatement only to lose, and then treated like a pariah by the chief upon his return. Perhaps that is because the city is still fighting the reinstatement.

Federal law supersedes state law, which supersedes department policy. It’s called the Supremacy Clause. The chief has apparently disregarded it as well as the reality of Graham v. Connor, which is case law that every police officer should be intimately familiar with.

Since Starks was reinstated, he’s received one temporary assignment after another, according to sources. He’s was assigned to training, which lasted two days, then accreditation until last Friday, now as the 12th Street Desk Officer. As a result, he’s worried and believes he’s being intentionally made to feel uncomfortable. (See section 17 of the motion below.)

Starks has been subject to a “pattern of harassment by individuals who support the Blackshire family.” The harassment has cost Starks the ability to obtain work outside the police department. (See section 13 of the motion below.)

Consequently, Starks’ attorney, Robert Newcomb, filed another motion of contempt against the Little Rock Police Department and the City of Little Rock on Tuesday. 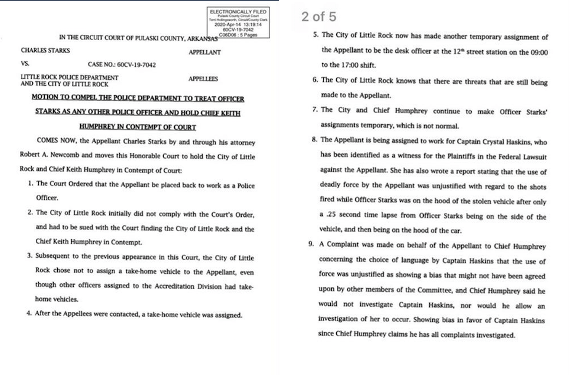 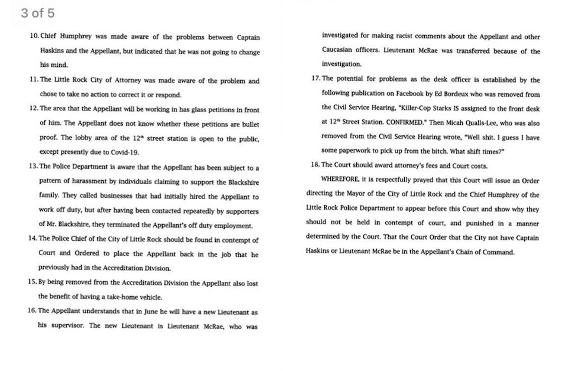 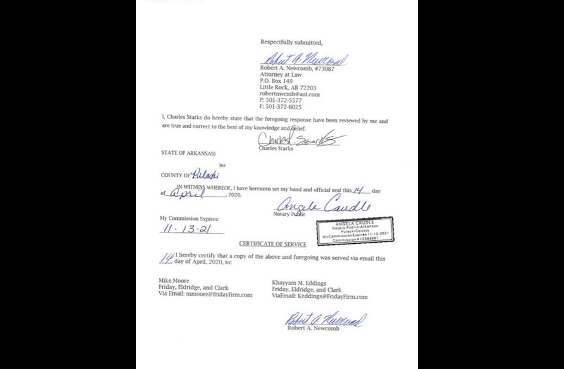 Law Officer reached out for comment from Chief Humphrey of the Little Rock Police Department for this story. At the time of publication we have not received a reply from his office.