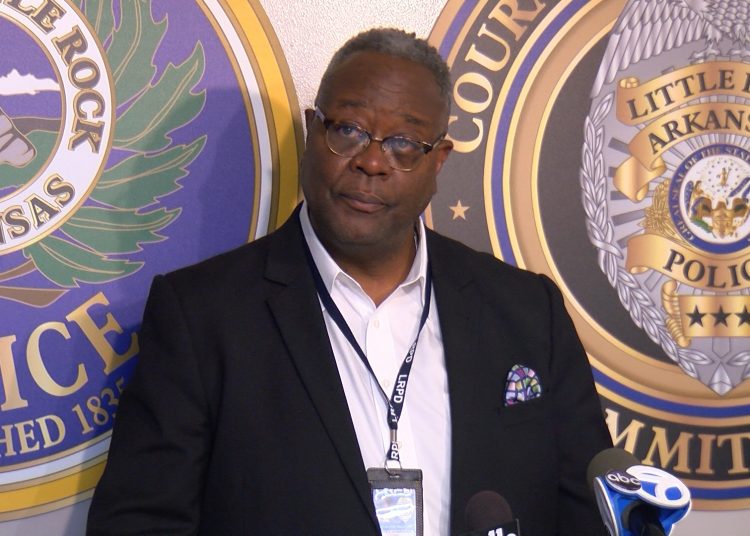 Last week we told you about the latest shenanigans facing Little Rock Police Chief Keith Humphrey when he allegedly recommended a civilian candidate for a finance job within the police department that not only had an existing warrant at the time of her application but legal issues involving the failure to pay credit cards.

An issue that we have also detailed that involves Humphrey.

Most of the attention in that story from our readers focused on the fact that two days after Karen Hunter’s application for the $80,000 position, Chief Humphrey was seen at her home at 0600 hours with his department issued vehicle backed into the driveway of Hunter’s home.

It is was an allegation caught on tape and while Humphrey has not commented, Hunter said that he was simply bringing her a police report.

Now that is service at it’s finest.

Well, not to be disappointed, and we never are when it comes to Little Rock Police Chief Keith Humphrey, a legal filing this week claims that Humphrey is using the department’s Internal Affairs division “as his personal investigative force” to punish Assistant Chief Hayward Finks.

Finks, a former applicant for the police chief job, filed a lawsuit against Humphrey almost a month ago alleging “a campaign of retaliation” from Humphrey because he testified in the Charles Starks appeal and claimed the investigation was “rushed and incomplete” while finding it strange that when the candidates interviewed with Mayor Frank Scott for the police chief position, he asked each of them that if they were hired, “who would be the first police officer they would fire.”

Just weeks after the hiring of Chief Keith Humphrey, Starks was fired despite the entire chain f command, including Assistant Chief Finks recommending that the shooting was justified.

This new allegation comes in a petition to Pulaski County Circuit Judge Chris Piazza filed this week that calls on the judge to block an Internal Affairs probe Finks says the chief has initiated following news reports that question whether Humphrey has intervened in the ongoing hiring process for a department manager to help a Karen Hunter get the job.

The city’s Human Resources department is already investigating the chief’s involvement and that review “should be allowed to continue without interference from Humphrey,” the three-page filing states.

The NWA Democrat Gazette reports that the petition was filed in Finks’ ongoing lawsuit against the chief and the city that claims Humphrey is retaliating against Finks because he testified about the mayor pressuring the department into rushing its probe of Officer Charles Starks.

A hearing has been set for May 28th but let’s break down what this allegation means because we’ve seen this before around the country.

The Internal Affairs Unit is under the scope and command of Chief Keith Humphrey. Humphrey controls it and makes final recommendations on what they discover.

While we doubt that investigators would simply clear Humphrey because he is their boss, another lawsuit against Humphrey alleges that he is denying personnel files to three employees because within those files, there are questions made by internal affairs that question the honesty of the chief.

For this, you will need to form your own opinion and we don’t think that will be a conclusion that will be hard to come by.

The city, the chief or the mayor have yet to discuss any of the lawsuits and just last week, the City Director said it was time for Humphrey to go. An opinion that we formed weeks ago.

But until then, we will keep reporting on the circus that has become the Little Rock Police Department.