The Chief Was Seen Leaving Her Home In The Early Morning 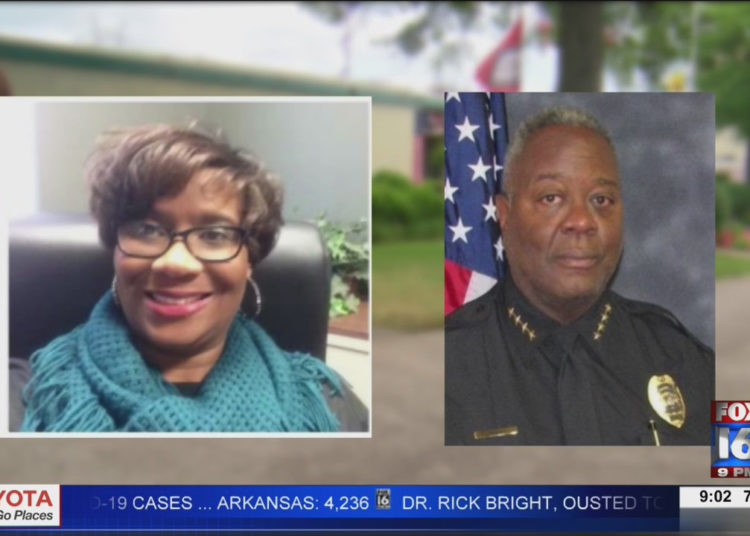 If you have been keeping up with our coverage of Little Rock Police Chief Keith Humphrey, you may have wondered why the proverbial ship has yet to sink.

This latest scandal, may just be the final leak in a boat driven by a man that never lets a day go by without something else to talk about.

In recent weeks, we have brought you story after story about Chief Humphrey. Everything from defying a court order, being sued by several of his officers including two assistant chiefs and his legal troubles over unpaid debts but for some reason this latest one feels different.

It all started with Chief Keith Humphrey recommending Karen Hunter for a job that would oversee the 80 million dollar department budget.

That is not out of the ordinary but what led up to that recommendation has just about everyone but maybe Chief Humphrey and Mayor Frank Scott scratching their head.

According to KARK, Hunter was one of 11 people who applied for the Administrative Services Manager position, which at the high end brings in a yearly salary of around $80,000.

She submitted her application to the police department on April 1 while having a warrant out for her arrest. If that’s not wild, what happened two days later will blow your mind.

Two days later around 6 a.m. Chief Keith Humphrey’s SUV was seen backed in at a home that Hunter listed as her address on her application.

IS IT TIME FOR THE LITTLE ROCK POLICE CHIEF TO GO

Little Rock Officer Kevin Sexson was on a call on the same street when he drove by and saw Humphrey’s department issued SUV and Humphrey emerging from the residence.

Sexson’s dash camera was still running from the call and Chief Humphrey came over to him and spoke.

“I saw the Chief, Chief Humphrey,” Sexson said. “He pulled up and spoke to me just cordially seeing how everything was going.”

Humphrey, who is married, declined to comment to KARK but Hunter told them that he was just dropping off a stolen car report.

If that isn’t perplexing (we mean the SUV being backed into a driveway) Hunter’s qualifications for the job certainly should be.

Hunter told KARK that she wasn’t honest on her application, and if you follow city policy, she should have been disqualified.

On her application, when questioned if she has a valid driver’s license, Hunter said yes, court records show no.

KARK says it was suspended more than three years ago for failure to appear on a traffic offense and only this week did she set settle that.

Hunter faced more trouble for that two years ago when she was caught in Little Rock driving with her suspended license. The fine on that went unpaid until days ago, when Hunter paid the balance of about  $400.

On the work experience section of the application, Hunter claims that she was an Assistant Vice President at a college.

Hunter says her real title is what’s posted on the Philander Smith College website, where she currently works. The site says Hunter is an Assistant to the Vice President of Student Affairs.

Then there are the financial judgments against her. Similar to Chief Humphrey, a credit card company is suing Hunter for the failure to pay.

Hunter allegedly racked up $1,014.76 in charges and has gone more than two years without trying to pay it off.

As we pointed out with the judgment against Humphrey, an existing financial judgment automatically disqualifies anyone from getting hired into law enforcement.

Despite this, Humphrey was hired.

It also appears that the Little Rock Police Policy prohibits any type of financial judgement while employed and could bring discipline up to termination.

We’ve stopped asking how Chief Humphrey was hired. That is up to the Mayor to answer and our sources tell us that he is squarely behind and supportive of Humphey.

It’s absolutely mind boggling. But there are small indications that the support is starting to crumble.

Just yesterday, City Director Lance Hines told a local radio station that it was time for Humphrey to go.

In an unprecedented decision, our editorial team said it was also time for Humphrey to leave.

Simply put, in almost twenty years of covering law enforcement news, we have never seen anything like this.

And that brings us back to that early morning police report that Humphrey was dropping off a report…..

Maybe that’s true but the problem with the actions and history of Chief Keith Humphrey is that every check is now bouncing (not to mention the huge lawsuit payouts from the city).

Trust is hard to come by and it is that lack of trust that has eroded any credibility that he has with his officers and the public.

Something will have to give in Little Rock because one thing has become apparent in recent months.

This behavior is not going away.