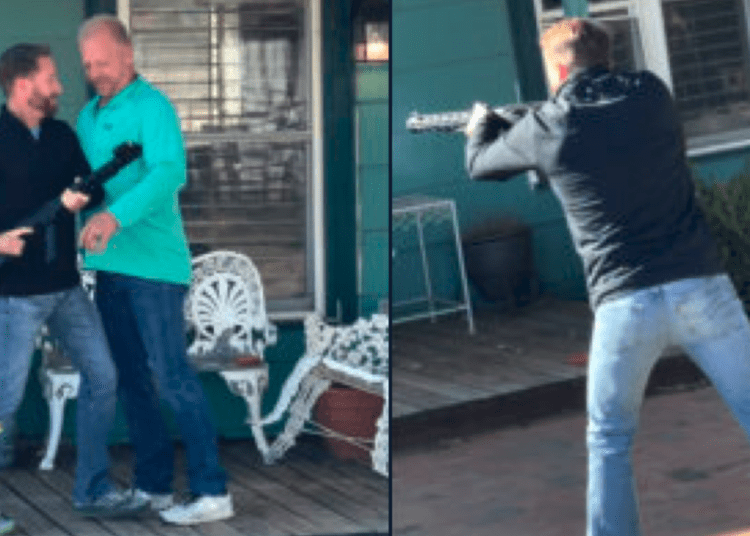 A Special Grand Jury in Texas voted not to indict Kyle Carruth in the fatal shooting of Chad Read. (Screenshot social media post by Jennifer Read)

LUBBOCK, Texas – A Texas man who was seen in a viral video fatally shooting his girlfriend’s ex-husband during a custody fight in November will not be criminally charged, according to the State Attorney General’s Office.

Texas Attorney General Ken Paxton, a Republican, announced Wednesday that a Special Grand Jury was convened and voted not to indict Kyle Carruth, who shot and killed Chad Read during the confrontation, Law&Crime reported.

Carruth’s girlfriend is Christina Read, who is Chad Read’s ex-wife.

The presentation of the case to the grand jury “included several eyewitnesses, family of Chad Read, and additional evidence that was not previously released to the public,” a statement on the Attorney General’s website said. “After several days of thorough inspection of the evidence, the Special Grand Jury concluded their investigation into the matter and deliberated on whether the evidence supported the filing of criminal charges against Kyle Carruth.”

On Wednesday, the Special Grand Jury voted “not to indict for any criminal charges against Kyle Carruth,” the statement said.

In December, Jennifer Read filed a $50 million wrongful death claim against Carruth. That case has been on hold pending the outcome of Paxton’s investigation.

“The criminal justice utterly failed Jennifer Read, the widow of Chad Read,” Jennifer’s attorney Tony Buzbee said in a statement emailed to Law&Crime. “Chad Read was involved in a heated discussion with his ex-wife concerning custody of his son. The video shows that Kyle Carruth injected himself into that discussion. We believe there was no legitimate reason for Kyle Carruth to bring a deadly weapon to an argument that he wasn’t even a part of. Chad Read died unarmed, shot and killed while simply trying to determine the whereabouts of his son. The civil matter has been on hold awaiting the outcome of the criminal proceedings. We will now aggressively pursue Jennifer Read’s claims in civil court.”

LUBBOCK, Texas – A Texas man was shot and killed while arguing with his ex-wife regarding a child custody dispute earlier this month, according to reports.

The fatal shooting occurred on Nov. 5, and was captured on cell phone video, according to attorney Matthew L. Harris, who is representing the victim’s widow. Harris says the footage was filmed by Jennifer Read.

The Lubbock Police Department has not concluded their investigation, reported KCBD, as the news outlet sought details in the deadly encounter.

“While LPD recognizes there is public interest in this case, there are multiple facets of this on-going investigation that dictate what can and cannot be released to the public, per Texas state law,” the department said in a statement.

Read the full statement issued by the Lubbock Police Department below. It was published by KCBD on Nov. 10.

The Lubbock Police Department would like to address the concerns of the public regarding case 21-43709, which is currently being investigated by the Metropolitan Special Crimes Unit.

Lubbock Police Officers were called to the 2100 block of 90th Street on Friday, November 5th at 4:20 p.m. for reports of shots fired.

Through the initial course of the investigation, it appears there was a verbal altercation between Read and another male related to a domestic incident that turned physical. Shortly after, shots were fired.

No arrests have been made and the investigation is on-going.

While LPD recognizes there is public interest in this case, there are multiple facets of this on-going investigation that dictate what can and cannot be released to the public, per Texas state law.

Regarding the concern surrounding LPD’s report writing process, per department policy, the initial responding officer’s responsibilities dictate the officer “Complete an initial, concise Crime Report, including the basic facts of the incident and the required elements of the crime, then document detailed and evidentiary information in a Supplement Report.”

All original reports that do not require further review before releasing are accessible to the public in our online reporting system once they have gone through the department’s records process. With this particular case, the report was available online once it made it through the records process.

Supplemental reports are not and have never been available to the public, unless they are included in an arrest warrant. The reason for that policy is to protect the integrity of each and every investigation, not to withhold information from the public.

The Lubbock Police Department prides itself on its relationship with the Lubbock community and strives each and every day to be an agency of transparency, no matter who is, or is not connected to an investigation.

We ask for the public’s patience as our investigators continue to work this case, just as it would any other.

Moreover, she filed a $50 million wrongful death lawsuit against Kyle Carruth and also Vitruvian Development LLC for the her husband’s shooting death, according to KCBD.

Jennifer Read blames Carruth for escalating the conflict and using a firearm even though no physical threat to life or property existed. The lawsuit states she and Chad Read went to his ex-wife’s place of business trying to find Chad’s youngest son, Fox News reported.

Chad and Christina were having a custody argument as Chad was trying to discern where his son was located. The lawsuit claims Christina continued to violate their custodial arrangement as Carruth “interjected himself” into the dispute.

“The decision to take this step has not been easy, and she respectfully declines any requests for interviews at this time,” a press release from her attorney says. “There has been a lot of speculation in the media, and on social media, regarding the events of Nov. 5, 2021.”

Carruth’s attorney, David M. Guinn, said the shooting was self-defense, according to KAMC.

“All Texans may lawfully brandish a firearm to protect themselves, their property and their business.” Guinn said. “When Kyle did that, Chad Read advanced on him.”