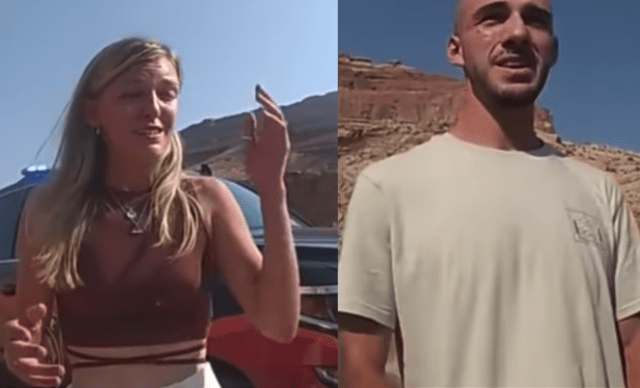 MOAB, Utah – Attorneys representing Gabby Petito’s parents announced Monday that they will file a $50 million wrongful death lawsuit against the Moab Police Department, two former leaders within the agency, and two officers who interacted with her shortly before her death.

According to the complaint, Moab officers Daniel Robbins and Eric Pratt failed to properly handle a 911 call, which included a witness claiming to see Brian Laundrie striking Petito and trying to take her cell phone and abandoned her in the middle of downtown Moab, Fox News reported.

Laundrie is believed to have bludgeoned Petito and strangled her to death at a campground in the Bridger-Teton National Forest, about two weeks after the couple was contacted by Moab police as they traveled cross-country.

“Had the officers involved had training to implement proper lethality assessment and to recognize the obvious indicators of abuse, it would have been clear to them that Gabby was a victim of intimate partner violence and needed immediate protection,” Brian Stewart, a lawyer for the family, said in a statement.

A previously undisclosed photo of Petito taken during the incident shows “a close-up view of Gabby’s face where blood is smeared on her cheek and left eye, revealing the violent nature of Brian’s attack.” It also shows that she was “grabbed across her nose and mouth, potentially restricting her airway,” Stewart claims.

The notice of claim was filed Friday and made public on Monday. It names Pratt and Robbins, former Moab Police Chief Bret Edge, and former Assistant Chief Braydon Palmer.

Edge went on leave shortly after the Petito case saturated national headlines and then returned to the department for a short period of time. Jared Garcia succeeded him as chief of police in May, according to Fox.

Edge had no comment on the case, saying, “I am no longer with the Moab Police Department.”

The text of the complaint focuses particularly on Pratt’s actions during the field investigation. He had seniority over Robbins, a relatively new officer, and on the bodycam video he appeared reluctant to take action against Petito, once he apparently believed she was the primary aggressor, not Laundrie.

An independent investigation into Moab’s response to the call “concluded that the officers made several mistakes and could not rule out that Gabby’s murder might have been prevented if the officers had handled the situation properly,” the filing reads.

Price Police Capt. Brandon Ratcliffe wrote in the independent investigative report, “I am confident and comfortable in stating the mistakes that were made were not made intentionally.”

The officers instructed the couple to split up at the conclusion of the detention, leaving Petito with their converted camper van and driving Laundrie to a motel – where management later told Fox News Digital they could not confirm he actually stayed the night.

Ratcliffe took issue with that decision and noted it in his report while also concluding the officers didn’t have actionable evidence.

Ratcliffe also questioned them about what authority they had to split them up if they didn’t have evidence of a domestic assault. Robbins said he couldn’t answer and Pratt admitted they couldn’t split the two up. But the couple didn’t object.