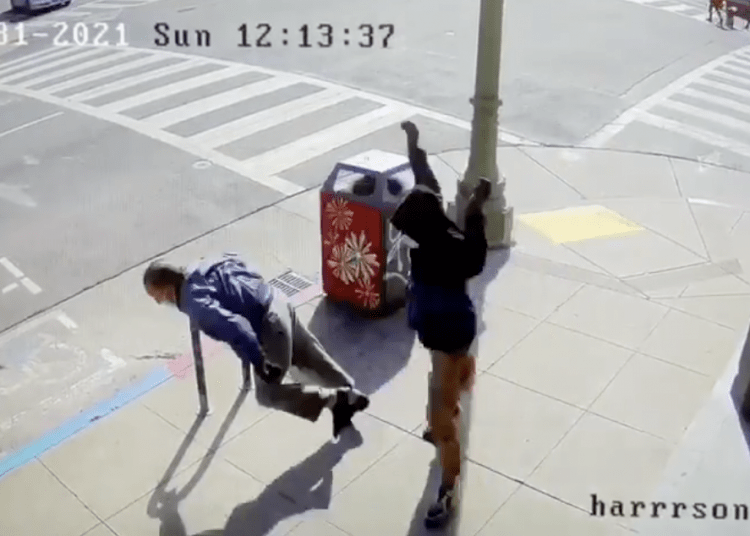 OAKLAND, Calif. — Oakland’s Chinatown has been experiencing an uptick in robberies and assaults on residents — including elderly people — in recent months, according to multiple reports and the police.

The Oakland Police Department said it is allocating more resources and patrols to Chinatown ahead of Lunar New Year on Friday amid a “recent surge in violent assaults” over the last few months.

OPD has reallocated resources and patrols to Chinatown ahead of the #LunarNewYear We’ve seen a recent surge in violent assaults and robberies, with many going unreported.
We ask our community members to partner with us and please come forward when a crime occurs.
#OPDCARES pic.twitter.com/1iBhXyBaZn

Video surveillance released by police shows a suspect assaulting the man, as well as two people ages 55 and 60, in the 800 block of Harrison Street on Jan. 31.

⚠️ WARNING: this video is hard to watch. Another shocking attack in Oakland’s Chinatown. 8th and Harrison Streets. Outside the Asian Resource Center.

In the first assault, the 91-year-old man can be seen walking down the street when a suspect comes up from behind and aggressively shoves him to the ground. The man was transported to a local hospital by ambulance and treated received medical attention for his injuries, FOX reported.

According to police, the suspect later approached a 60-year-old man and 55-year-old woman on the same street and pushed them from behind as they were walking. The woman lost consciousness and the man suffered injuries. Both received medical attention at a local hospital.

Actors Daniel Dae Kim and Daniel Wu were offering a $25,000 reward for information leading to the arrest and conviction of the suspect responsible for the assaults. Both have spoken out in recent weeks about the growing number of attacks on Asian Americans, FOX reported.

The skyrocketing number of hate crimes against Asian Americans continues to grow, despite our repeated pleas for help. The crimes ignored and even excused. Remember Vincent Chin. #EnoughisEnough. @danieldaekim & I are offering a $25,000 reward.. https://t.co/psNxAPeRVR

“The skyrocketing number of hate crimes against Asian Americans continues to grow, despite our repeated pleas for help,” Wu tweeted on Feb. 4.

Muslim was arrested last week and is currently in custody at the Santa Rita Jail, KRON 4 reported.

Authorities have charged 28-year-old Yahya Muslim in the attack on a 91-year-old man in Chinatown. (Photo via KTVU)

Police also said they have a video showing another male suspect — identified as Deveion Lamont Byrd — robbing an 80-year-old woman of $200 and running away. Byrd is also the prime suspect in a string of other robberies at different businesses in the area, police said.

Yet another video from a recent battering shows a woman – described as a 70-year-old “grandma” – being robbed while coming home from the bank.

𝟳𝟬-𝗬𝗘𝗔𝗥 𝗢𝗟𝗗 𝗚𝗥𝗔𝗡𝗗𝗠𝗔 𝗔𝗦𝗦𝗔𝗨𝗟𝗧𝗘𝗗 & 𝗥𝗢𝗕𝗕𝗘𝗗: Not again!
⠀
A young woman told me her grandma was robbed while coming home from the bank February 3rd around 11am. 6th Avenue and International Boulevard in Oakland. pic.twitter.com/eqbDPL3jbx

The crimes follow a general pattern of violence being committed against Asians – both residents and merchants – in Oakland’s Chinatown. As a result, the surge has led residents to call on local leaders and police to do more to quell the violence.

Carl Chan, president of the Oakland Chinatown Chamber of Commerce, said during a press conference last week that young people have started carrying guns for their safety.

“Today, we’re sending a message to those who commit crimes in this city, that we will pursue you, and we will arrest you,” Armstrong said on Monday.

Despite the surge in crime, Oakland city leaders have for months called for defunding the police.

In December, the department made cuts that eliminated details that put extra officers in high crime areas, the San Francisco Chronicle reported.

According to a report from Bay City News, Oakland recorded 15 homicides last month — the greatest number of killings recorded in January in 20 years.