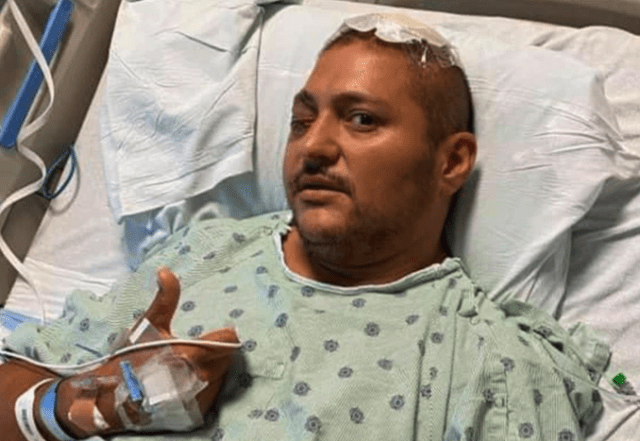 CHICAGO — Chicago Police Officer Carlos Yanez Jr. was severely injured by gunshot wounds sustained during the same encounter that claimed the life of Officer Ella French. The critically injured officer suffered three gunshot wounds: One exited an eye, one lodged in the back of the head and one struck his shoulder, Law Officer reported.

Now the officer’s family has released a video in which he spoke publicly for the first time since the shooting. Moreover, his father targeted the mayor for criticism regarding her ideas of police reform, which make officers vulnerable to violent criminals, according to reports.

“Thank you for your support, and your donations, and your prayers,” Yanez Jr., 39, says with a weak voice in the video, which was released late Wednesday.

A GoFundMe account was established for the hurting officer, which says he faces a “potentially lifelong disability.”

Meanwhile, Yanez’s father—a retired CPD officer—has been outspoken in his criticism of Chicago Mayor Lori Lightfoot due to a series of reforms and policy changes that he claimed laid the groundwork for the traffic stop that led to the shooting.

Carlos Yanez Sr. told the Chicago Sun-Times that he twice told the mayor’s office staff that his son was “not a fan of Lori Lightfoot, to put it mildly” and that the family did not want her at the hospital where he was taken the night of the shooting. When she arrived, a group of about 30 officers turned their backs to her, Law Officer reported.

“I said that the actions by her administration and her rhetoric of saying how police need to be reconditioned or retrained or whatever was causing them to be in danger. That it was not allowing the officers to take the instinctive action necessary to protect themselves,” Yanez Sr. told the news outlet.

“All the officers are told now that, if you draw your weapon and it’s not a situation that warrants it, unless you have guaranteed proof, there’ll be consequences,” he said.

“They didn’t do that when I was on the job. They let us be the police. There wasn’t a day that I didn’t draw my weapon, have it behind my leg or behind my thigh … It’s not about race. It’s about survival of the officer. But they don’t have that now. They don’t have that confidence that someone’s gonna back them up,” the father declared.

French, 29, was fatally shot and Yanez Jr. critically wounded after they stopped a vehicle on the city’s South Side on Saturday. Emonte Morgan, 21, and his 22-year-old brother Eric, both convicted felons, have been charged in the brazen attack, Law Officer reported.

Emonte was charged with first-degree murder, attempted first-degree murder, aggravated unlawful use of a weapon, and unlawful use of a weapon by a felon. His brother is facing weapons and obstruction charges, prosecutors said. The firearm used “was the product of a straw purchase,” CPD Supt. David Brown said. It was illegally purchased through an Indiana man, Jamel Danzy, 29, who has also been charged in the case.

According to CBS Chicago, Yanez sustained a gunshot wound that lodged in his brain. Danzy was allowed to post bond and is currently out of custody, a fact that has drawn the ire of many police officers, including Supt. Brown, Law Officer reported.

Yanez Sr. told the Chicago Sun-Times that his son had little choice but to keep his gun holstered.

“When they show up, the bad guys are ready for them. They know they can’t draw their weapons. They know they can’t be chased. You can’t put hands on them without getting sued. Everybody’s got a camera and they’re always challenging them, provoking them. It’s a no-win situation for them,” he rightfully proclaimed.

He continued: “She shows up to say remorse for the police officer shot. But what have you done to promote police in the eyes of the public and say, ‘We need our police’? [Instead, she says], ‘We’ve got to stop this police violence.’ It’s not police violence. It’s one officer that committed a crime.”

“Even doctors make mistakes and they’re sued. But they’re not all washed with the same brush that they’re all bad. You don’t teach the children to fear the police like they do now … She’s creating an environment where people are starting to question if the police are good or not,” Yanez Sr. said.

“It’s not pro-police or pro-people. It’s about pro-right and wrong, good and evil. But she demonstrates by her actions that she doesn’t really have any consideration for the safety of the officers. They’re expendable. They’re replaceable. Hire new ones. Train ’em differently. But they’re gonna get killed. You can’t change survival tactics that are in place for years to protect the officers as well as the citizens to pacify some voters. It’s not gonna work,” he added.

The rightfully incensed father declared the mayor should stop telling Supt. Brown and his top brass how to run the department and “let the police be the police.”

“Mayor Lightfoot, you’re not a police officer. … The law enforcement you did was prosecution. It’s a totally different arena. We catch the lions and the evil monsters for you in a cage. Then you prosecute them,” Yanez Sr. said.

“Let the people hunting down evil and catching the monsters — let them do it the way they have to do it to catch ’em, not the way you feel is politically correct,” he said.

Yanez Sr. said he told Lightfoot directly that she faces the possibility that rank-and-file officers will take more severe measures than just turning their backs on her at the hospital.

“That’s just a physical protest … But God forbid their mindset changes and they stop being the police. They stop rushing to help people. Stop overextending above and beyond to be there when they’re called. They’ll just eventually say, ‘I’m gonna go to work, punch in and not risk my life because I’ll get fired,’” he concluded.