Two suspects were taken into custody, a third remains at large 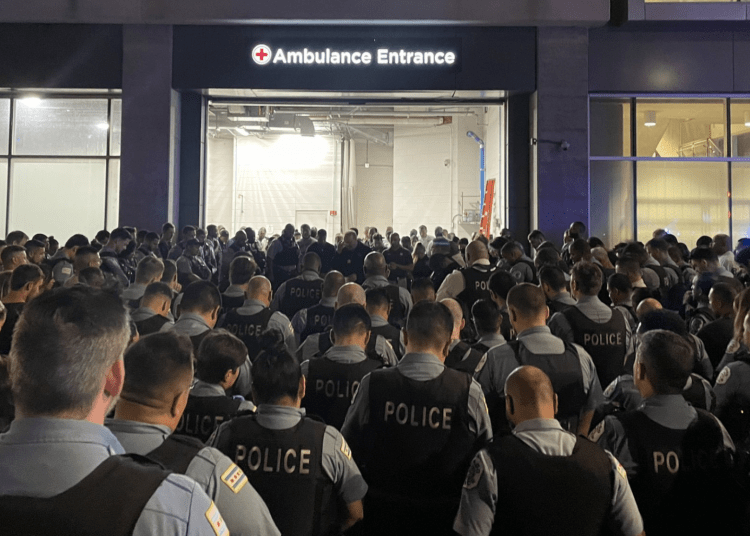 Chicago police officers gather overnight outside the University of Chicago Medical Center, where one officer died and another remained in critical condition Saturday night. (Chicago Police)

UPDATE: The Chicago police officer who was murdered was identified as 29-year-old Ella French, police said.

She was part of the Cook County Sheriff’s Office before joining CPD, ABC 7 Chicago reported.

A male officer continues fighting for his life Sunday. The critically injured officer suffered three gunshot wounds: One exited an eye, one lodged in the back of the head and one struck his shoulder, according to local news sources. He remains in critical condition in the ICU.

The pastor at his church said he is 39. The congregation offered a moment of silence during Sunday morning services, and the pastor prayed with the officer’s family.

“The father, I was telling him, ‘you need to get some rest,'” New Life Community Church Pastor Mark Jobe said. “He said, ‘No, I’m gonna stay here as many days as it takes and not leave my son’s side.'”

CHICAGO — A Chicago police officer died and another was critically wounded Saturday night during a confrontation at a traffic stop on the city’s South Side, according to reports.

A Community Safety Team of officers conducted a traffic stop near the intersection of 63rd Street and Bell Avenue when gunfire erupted toward them about 9:08 p.m. Both a female officer and a male officer were hit, Fox 32 Chicago reported.

The officers returned fire and struck one of three suspects. The wounded perpetrator was hospitalized while a second was taken into custody. A third suspect remains at large, police said, according to the Chicago Tribune.

Afterward, a large group of CPD officers gathered outside the University of Chicago Medical Center, where the two wounded police officers were transported. One of the officers, a woman, later died there, the Cook County medical examiner’s office told the Chicago Sun-Times.

“We ask the city of Chicago to pray for both officers, their families and their fellow officers who are struggling with the facts of this,” First Deputy Superintendent Eric Carter told reporters, Fox reported. “It’s just another example of how the Chicago Police Department and these officers put their lives above that of others to protect this city day in, day out.”

Superintendent David Brown was out of town during the fatal encounter, but released the following statement early Sunday:

“The Chicago Police Department has lost one of our own in an incomprehensible act of violence. A 29-year-old female officer assigned to the Community Safety Team was shot and killed in the line of duty Saturday night. A second officer was also shot and is in critical condition.

“These officers put the safety and lives of others above their own, serving with courage and honor despite knowing the cost.

“I ask you to please hold their fellow officers in your thoughts as they process this heartbreaking tragedy.

“We will never forget the sacrifices these officers made to protect this city. We cannot forget.”

Mayor Lori Lightfoot said the officer who died was “very young on the job, but incredibly enthusiastic to do the work.”

“We must remind ourselves every day that our officers are fearless in the face of danger,” she said. “It’s a very sad and tragic day for our city.”