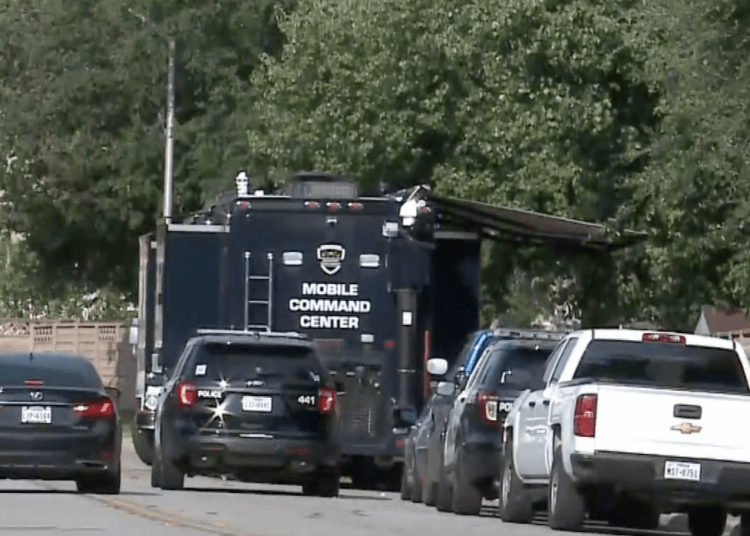 The mother was the last of three hostages released by the suspect, and she is OK. Cedar Park police say the suspect came out peacefully around 9 a.m.

About an hour before the suspect surrendered, he released his sister and brother, but still had his mother inside the home, KXAN reported.

9:00am UPDATE: The suspect and last hostage have come out of the home peacefully. The scene will continue to be active for quite a while as we investigate. https://t.co/7Doy83CKjN

In an earlier press conference, Interim Chief Mike Harmon said the brother and sister are “in good health” and were treated by emergency personnel to ensure that.

Harmon also said two of officers shot during the incident Sunday have been released from the hospital and sent home while the other is headed in for surgery.

“This is the most complex situation I’ve been involved with in 20 years,” Harmon said.

The Central Texas SWAT team and members of the FBI were on scene with Cedar Park police.

As of 4:30 a.m. local time, Cedar Park Police directed residents on Natalie Cove in the Heritage Park subdivision to stay inside.

“It’s still unsafe to leave as we are working an active scene involving a suspect barricaded inside his home,” the tweet said. “Please do not leave until we say it is safe to do so.”

Officers have reportedly been in contact with both the suspect and the hostages, who are the suspect’s family members, and officials say it’s unclear what specific weapons the suspect may have at this time, Fox reported.

4:30am Update: If you live on Natalie Cove in the Heritage Park subdivision, you need to stay inside your home. It's still unsafe to leave as we are working an active scene involving a suspect barricaded inside his home.
Please do not leave until we say it is safe to do so. https://t.co/7Doy83CKjN

According to Cedar Park Interim Police Chief Mike Harmon, when the mother called she said her son kicked in the door and was acting aggressively. When officers went inside the home, the suspect opened fire.

One officer remains in the hospital with non-life threatening injuries. A law enforcement official tells FOX 7 Austin that the injuries to the officers include a gunshot wound to the arm, a shot to the chest that was protected by the officer’s bullet-proof vest, and a graze wound to the head.

The mother is now one of three hostages inside the home. One of the other hostages is under the age of 18.

During a press conference last night, Interim Chief Harmon said police have a history at the residence. He also said the suspect has been using social media, conducting a Facebook Live from inside the home.

The Cedar Park Police Department said on Twitter that officers were responding to a call at a residence when they were shot and one person was barricaded inside the home, KVUE reported.

A spokesperson for the department did not immediately respond to messages for comment.

In a tweet, the department said the three officers were at a local hospital in stable condition.

The suspect has not been apprehended as tactical officers have responded.

At this time we can confirm three Cedar Park Police Officers have been shot. They are at a local hospital in stable condition.
This remains a very active scene, the subject is not in custody at this time. https://t.co/7Doy83CKjN

Moreover, the incident could be a hostage situation with children inside the home, FOX 7 Austin reported, citing police.

Police are asking people in the area to stay in their homes during the incident.