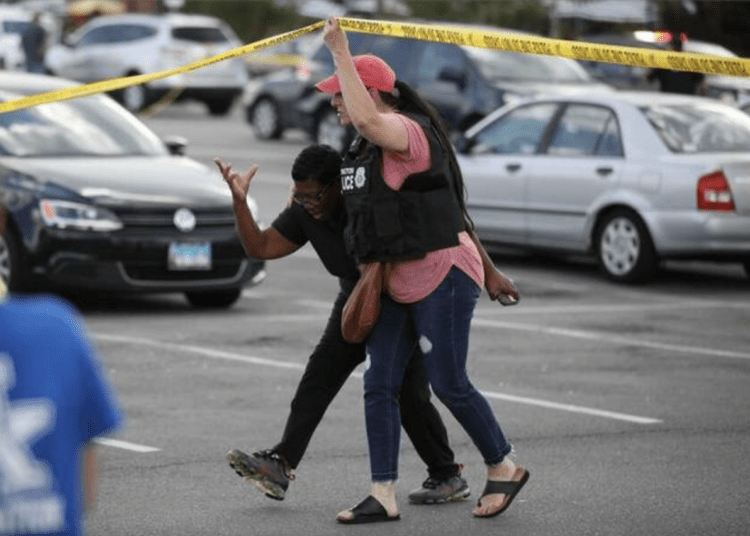 An unidentified off-duty Lexington police officer jumped into action while a suspect was shooting people at the Fayette Mall on Sunday. (Facebook)

The victim of a fatal Kentucky mall shooting was identified Monday as a 17-year-old teen and two people associated with him were arrested and charged with tampering with evidence, authorities said.

Kenneth Wayne Bottoms Jr. died Sunday at the University of Kentucky Medical Center of a gunshot wound, the Fayette County Coroner’s Office said in a statement. The manner of death was listed as a homicide, Fox reported.

Two others who were wounded in the shooting late Sunday afternoon outside a store at the Fayette Mall in Lexington are believed to be uninvolved bystanders, police said in a statement. The 41-year-old man and 17-year-old girl suffered non-life-threatening injuries, police said.

The shooting unfolded Sunday at the Fayette Mall in Lexington

The shooting appears to have followed a verbal altercation between the shooter, Bottoms and others, police said in a statement. A single suspect is believed to have fired shots at Bottoms and then fled the scene, the statement said.

Officers evacuated the mall and checked each store after the shooting, police said in a statement.

Police have not released details on the shooter, but have sought tips from the public to help in the investigation.

Meanwhile, officers arrested Nasir Lyons and Cion Townsend, both 18, who were at the mall at the time of the shooting and were associated with Bottoms, police said. Both men were seen removing evidence from Bottoms’ body and then running away, news outlets reported, citing arrest citations.

LEXINGTON, Ky. — An off-duty police officer jumped into action while a homicidal suspect was shooting people at a Lexington Mall on Sunday. One person was killed while two others were injured, according to news reports.

The Fayette County coroner’s office has identified the victim who died after he was shot at Fayette Mall Sunday, Kentucky.com reported.

Kenneth Wayne Bottoms Jr., 17, died Sunday from the injuries he sustained in the shooting. He was pronounced dead at University of Kentucky Chandler Hospital a couple of hours later, according to the coroner’s office.

Bottoms was one of three people shot in the altercation, police said. The other two were taken to the hospital. Lt. Chris Van Brackel said Monday morning he didn’t have an update on the conditions of the other two.

Lexington Police Chief Lawrence Weathers said Sunday evening that police believe the intended target of the shooting may have known the shooter. Police were still working to identify a suspect or suspects Sunday night, Weathers said. They were talking to multiple witnesses.

While the chaos occurred, there was an off-duty police officer who was on scene. Her actions are noteworthy.

Facebook user John Douglas highlighted the response of the officer who did what cops do; jump into action when things get chaotic.

A “off duty” female Lexington police officer was having dinner at the Olive Garden in front of the Lexington/Fayette, KY Mall. She learned there was a report of an active shooter inside the mall and ran out to her car, got her vest and tossed it over her shirt (while in flip flops) and sprung into action, shepherding people from inside the mall to safety outside.

Remember, at the active shooter situation inside the Lexington/Fayette, Kentucky Mall today – it was the POLICE running INTO the situation while everyone else was running OUT! The shooter shot 3 people, 1 deceased.

A “off duty” female Lexington police officer was having dinner at the Olive Garden in front of the Lexington/Fayette, KY…

Kudos to the unidentified officer!

University of Kentucky Healthcare, which has Lexington’s only level 1 trauma center, temporarily restricted visitors Sunday night “for crowd control and safety precautions,” university spokesman Jay Blanton said. The restriction of visitors was related to the shooting and put in place out of an abundance of caution, spokeswoman Kristi Willett said.