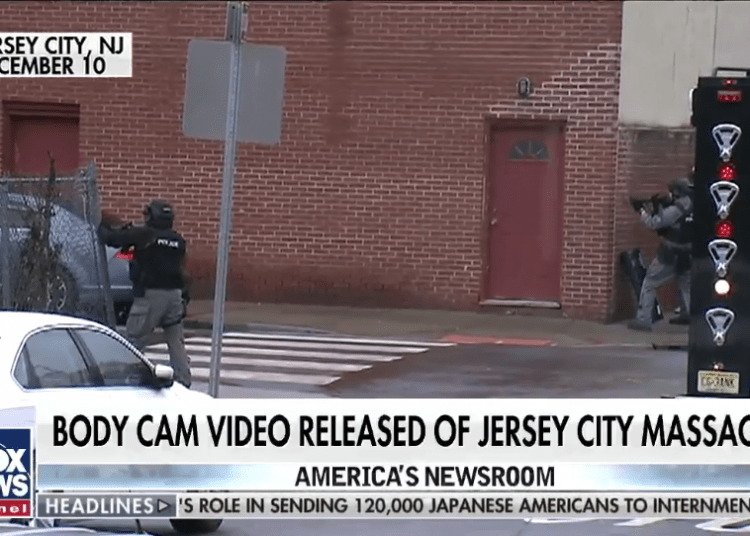 The video files last more than three hours and were obtained Thursday by The Associated Press under a public records law request, Fox News reported.

In one brief clip, a Jersey City police officer is seen firing his weapon toward the market from the window of a Catholic school across the street.

“I think he’s down…I got a gun on the ground,” the officer is heard saying. “No, he’s still moving.”

David Anderson, 47, and Francine Graham, 50, stormed the market with guns on Dec. 10, fueled by hatred of Jews and police, according to the report.

Anderson is seen in the video exiting a van with a weapon before entering the market, sending nearby people scattering away from the shop.

In this Dec. 10, 2019 image above made from newly released video a Jersey City police officer prepares to discharge his weapon from the window of a Catholic school during a fierce gun. (Jersey City Police Department via the New Jersey Attorney General’s Office)

Three people were shot and killed at the market–Mindel Ferencz, 31, the wife of the owner; Moshe Deutsch, 24, a Brooklyn, N.Y., rabbinical student; and store employee Douglas Miguel Rodriguez.

Rodriguez was shot as he held the back door open for a wounded customer to escape, police said.

Earlier, the pair killed Jersey City Detective Joseph Seals during a chance encounter at a cemetery.

Anderson and Graham were killed after a lengthy gun battle with police. The noise from gunfire lasted hours.

Investigators later found social media posts in which Anderson referred to Jews as “imposters who inhabited synagogues of Satan.”

In the aftermath of the horrific shooting spree, the Stephen Siller Tunnel to Towers Foundation graciously said they would pay off the mortgage for the family of Det. Seals. The 40-year-old cop was married and the father of five children.