This is the story of Greg Stevens 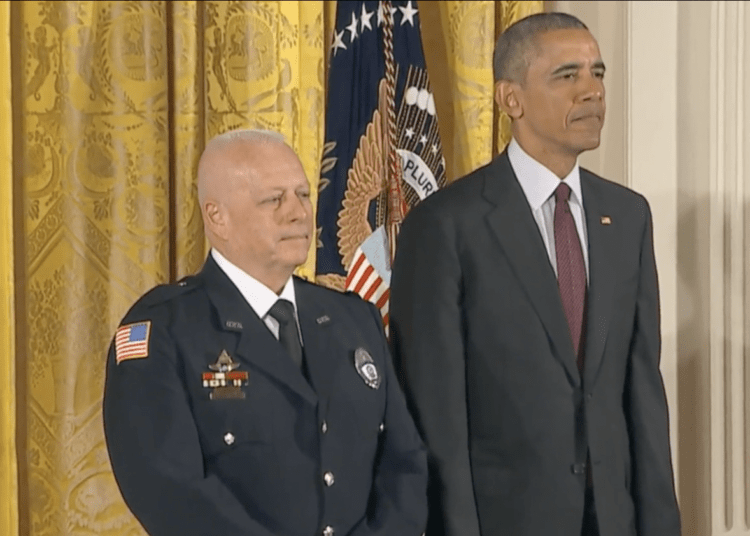 Officer Greg Stevens about to receive the Presidential Medal of Valor from President Obama, 2015. (Jimmy Meeks)

The first ISIS attack on American soil was stopped by a traffic cop. The officer’s name is Greg Stevens. He served as a police officer for 45 years.

Stevens shot and killed two ISIS terrorists who showed up at a convention center in Garland, Texas, intending to commit a massacre in 2015. For his heroics, Stevens was awarded the Presidential Medal of Valor.

This is Greg Steven’s story, courtesy of Jimmy Meeks and The Corneilius Project:

Law Officer appreciates Stevens sharing his story with Jimmy Meeks and The Cornelius Project. He is a true American hero.

If you’re an avid Law Officer reader, you might remember Meeks, a 35-year retired police officer in Texas,

In July he was concerned that the pro-police crowd was just kind of “sitting back and watching the other side take over.” In his mind, they weren’t speaking out as much as they should have.

So he staged his own ”protest.”

Meeks, put together his own signs and headed to a busy intersection, Law Officer reported.

“I knew that Tuesday, July 7, was the 4th anniversary of the night the officers were killed in Dallas. And I just felt the public needed to be reminded of that,” Meeks said.

As you can see, Meeks can be a bit extreme. Now he is taking his “show on the road” in an effort to demonstrate support for the police in various ways.

He leaves this Saturday (Sept. 26) for a “Nationwide police mission trip,” as he calls it. And it won’t be the first time he’s done this.

Meeks has printed out 20,000 business cards promoting his new website: www.thecorneliusproject.com. He’ll throw the cards in his car and head first for Chicago this Saturday. He intends to host a prayer time for cops this Monday night (6:30 p.m. CST). It will be live on his Facebook page, Sheepdog Seminars.

“We live in some troublesome times for cops, and they need our support. And I love showing support,” Meeks said.

“My wife is nervous about it because of COVID – and I am too, quite frankly, but the guys on the streets are battling it everyday. So here I go,” he said.

The new website will feature different topics for discussion and consideration, Meeks said, “from verbal de-escalation skills to spiritual matters.”

“I want the officers to know that the most pro-cop Person in the universe is God and HIs Son, Jesus. They are in their corner – many of them just don’t know it. But they’re about to.”

Meeks’ website is named after Cornelius, a first century Roman Centurion. “He was a captain over patrol, with about a hundred troops under him.”

Meeks noted something else about Cornelius few think about.

“Cornelius was the first Gentile (non-Jewish) convert. And he was a cop. So, when God started bringing non-Jews into His family; He started with the police! I am convinced that if cops ever get a glimpse of this Warrior God, they’ll give it more consideration.”

The website goes live on Saturday, September 26, Meeks says. There are shortcuts that are easier to remember that lead to the website, he added.

One of the features of Meeks’ new website is the testimonies of officers who have had some rather dramatic experiences. Please note the embedded video at the top of this article. Officer Greg Stevens’ story is a sample of what visitors will find on the website.

Meeks said an App by the same name will also soon be available. “It’s called ‘The Cornelius Project,” he added. “It will have all kinds of stuff on it.”

Law Officer is pleased to support Meeks on his adventure. There is a lot of hopelessness out there. We know that he will bring a message of hope and encouragement to so many officers that cross his path.