Rioters lit dumpsters on fire, and threw fireworks, rocks, and 'sharp chunks of ceramic' at officers 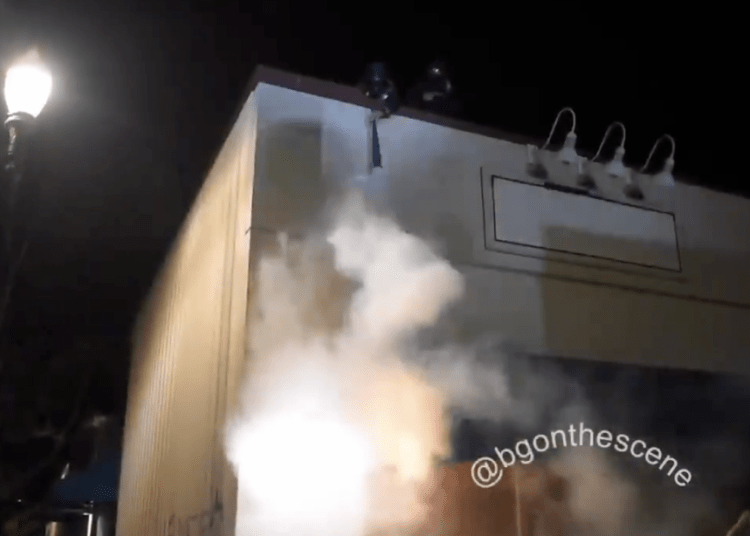 Portland Police Bureau North Precinct was set on fire during another night of riots. (Twitter)

PORTLAND, Ore. — Portland police declared a riot at the city’s North Precinct after officers reported that protesters threw rocks, bottles and shined lasers in their direction. Police said they made 23 arrests over the course of the night on various charges like interfering with a peace officer and rioting, KATU reported.

A fire burned an awning at the city’s north precinct late Sunday, news outlets reported. The tear gas was deployed after the fire had been set, according to news outlets.

Police officers on the rooftop reach over to extinguish the fire outside the North Precinct #PortlandRiots #PortlandProtests #Portland pic.twitter.com/2vhEWenvSK

Rioters had marched to the precinct from a park, chanting several things including “Jacob Blake,” who Wisconsin Gov. Tony Evers identified as the man shot by a police officer in Kenosha on Sunday.

“Criminal Activity has continued,” the department said on Twitter. “This event is now a RIOT. All persons must leave to the SOUTH. Failure to adhere to this direction may subject you to citation, arrest, and/or crowd control agents including, but not limited to, tear gas and impact weapons.”

Despite numerous warnings, criminal activity is continuing, including rocks and bottles thrown and lasers pointed toward officers. This is being declared an UNLAWFUL ASSEMBLY. All participants must leave to the SOUTH. (cont'd)

The latest unrest follows a violent protest on Saturday that was finally broken up by federal authorities from a plaza near a federal building as dueling demonstrations in Portland by right-wing and left-wing protesters turned violent and 14 were arrested, Fox reported.

President Trump urged leaders in Oregon again to request federal assistance to quell the violence on Saturday, after city Mayor Ted Wheeler and Gov. Kate Brown — both Democrats, criticized his decision to deploy troops to the city to protect federal property in July.

He said Gov. Kate Brown,  D-Ore., has over 7,800 national guardsmen who she refuses to activate to contend with the situation in Portland.

“Oregon has the resources to solve this problem and yet they refuse to do it,” he said.