The frightening looking man was a beggar, not a bank robber 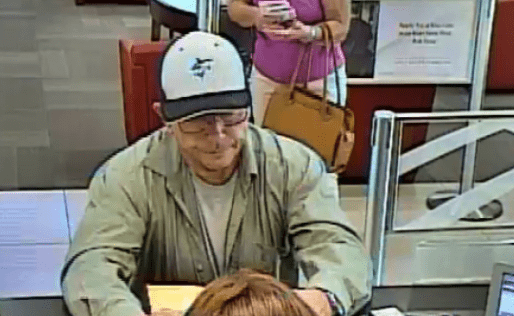 File photo - Golden Gate Bank Robber used for illustrative purposes only. He is unrelated to the story below. (Collier County Sheriff's Office)

Throughout history bank robbers attained notorious reputations due to the violent nature of their crimes.

Modern bank protocols instruct tellers to surrender cash without a bit of resistance at the first sign of a robbery. As a result, many bank robbers have resorted to “demand note” robberies. I.e. simply write a note demanding cash, quietly hand it to the teller, and walk out of the bank without drawing attention to the crime.

Consequently, banks have become an easy, profitable target. As a matter of fact, with lenient bail reform laws in New York state, one such criminal is accused of committing five “demand-note” bank robberies within one week in January.

However, due to these protocols, law enforcement has encountered many crooks who are less than formidable bandits. This came to mind while compiling a news story regarding a Texas bank robbery suspect we dubbed “Black Face Bandit.” The light skinned suspect placed black polish on his face and committed a “demand-note” bank robbery in Buda, Texas.

Years ago I responded to a bank robbery in progress. The dispatcher provided the suspect description as officers rolled to the scene.

A partner of mine found the listed suspect walking on a major thoroughfare a short distance from the bank. He had a huge smile on his face as he was playing with a wad of cash like it was monopoly money.

Local cops knew him well. He was one of our “regulars,” the kind that police run into almost every day. Although he wasn’t homeless, he looked the part since he was a scam artist.

On this particular day, Steve walked into the bank and asked, “Can I have some money?” He wasn’t committing a robbery, he was simply “begging” in the bank.

Nevertheless, due to his “frightening-disheveled” appearance, the bank teller “feared” the man asking for cash was committing a robbery, so she quickly handed him a drawer full of U.S. currency, and off he went, happy as a clam.

Steve couldn’t believe his good fortune. He often asked business owners and random people on the street for money, and they typically told him to get a job. But not the bank! They gave him a couple thousand in cash and hit the silent robbery alarm.

By the time we completed our investigation, we didn’t think we had the elements to arrest Steve for bank robbery. The responding FBI agent laughed and said, “I don’t want anything to do with him.” Nevertheless, we booked him on a reduced charge, but fully expected the case to get rejected by the DA’s office. … Although my memory has faded, I believe he pled to misdemeanor trespass or some such charge.

Do you have a “Steve” story?