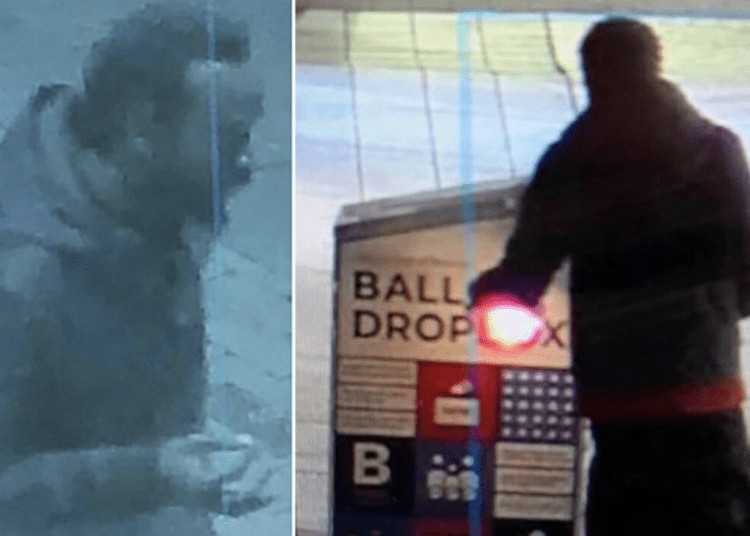 Authorities asked the public for help identifying the individual seen on surveillance video igniting a fire at approximately 4 a.m. in the ballot drop box outside of the Boston Public Library Main Branch in Copley Square. (Boston Police Department)

BOSTON — Boston Police and the FBI announced Monday that they have arrested the man spotted on surveillance footage allegedly igniting a fire inside a ballot drop off box outside the main campus of the Boston Public Library over the weekend.

Worldy Armand, 39, is expected to be arraigned in Boston Municipal Court on the charge of willful and malicious burning, the Boston Police Department said in a statement.

The FBI joined the investigation Sunday after the Massachusetts Secretary of State’s Office made them aware of the overnight attempted arson attack that happened at approximately 4 a.m. outside of the Boston Public Library Main Branch, in Copley Square. The police department released two photos taken from surveillance video, which reportedly show the suspect igniting the fire.

Armand was initially taken into custody at about 10:50 p.m. on Sunday when officers out on patrol in the area of Copley Square observed a male matching the description of the suspect wanted in connection to the ballot box fire.

#InvestigationUpdate: Suspect Charged with Willful and Malicious Burning of Ballot Box in the area of 700 Boylston Street in the Back Bay. https://t.co/UzgibHDj5q pic.twitter.com/0zVjLfzkuC

Police said officers approached the individual and eventually obtained his identity, Fox News reported. He had an active warrant out of Ipswich District Court for receiving stolen property. Following an investigation, members of the Fire Investigation Unit were able to identify Armand as the suspect in the ballot box fire incident, according to the police statement.

“Federal authorities are now investigating this matter. For the next several weeks, it is a top priority of our offices to help maintain the integrity of the election process in Massachusetts by aggressively enforcing federal election laws,” U.S. Attorney Andrew E. Lelling and FBI special agent Joseph R. Bonavolonta said in a joint statement on Sunday.

“Voters in Massachusetts can feel confident in the success of the information-sharing protocols that we have established with our local, state and federal election security partners in advance of the 2020 election,” the statement continued. “We remain fully committed to working with these partners to protect our communities as Americans exercise their right to vote. Help from the public is also vital to our effort. We encourage members of the public to remain vigilant and immediately report any suspicious, election-related activity to us.”

In a statement from Boston Police Department, officers responded to the area of 700 Boylston St. at about 4:11 a.m. to find Boston Fire already at the scene tending to smoke coming from an early-voting ballot box. Crews were able to extinguish the fire by filling the ballot box with water.

Authorities asked the public for help identifying the individual seen on surveillance video igniting a fire at approximately 4 a.m. in the ballot drop box outside of the Boston Public Library Main Branch in Copley Square. (Boston Police Department)

Massachusetts Secretary of the Commonwealth William F. Galvin said voters may track their ballots at www.TrackMyBallotMA.com to confirm receipt. The Boston Elections Department urged those who are not able to confirm their ballot status through the website, and who used the Copley Square dropbox between 2:30 p.m. on Saturday and 4 a.m. on Sunday, to contact them immediately, Fox reported.

Galvin said he asked the FBI to investigate what appeared to be a “deliberate attack” on the ballot box.

“What happened in the early hours of this morning to the ballot drop box in Copley Square is a disgrace to democracy, a disrespect to the voters fulfilling their civic duty, and a crime,” Galvin and Boston Mayor Martin J. Walsh said in a joint statement of their own.

“Our first and foremost priority is maintaining the integrity of our elections process and ensuring transparency and trust with our voters, and any effort to undermine or tamper with that process must be prosecuted to the fullest extent of the law. We ask voters not to be intimidated by this bad act, and remain committed to making their voices heard in this and every election.”

Amid concerns over malicious attacks on drop boxes, Galvin has also directed all local election officials to increase security around them, including employing drop box guards and video surveillance and to empty drop boxes frequently.