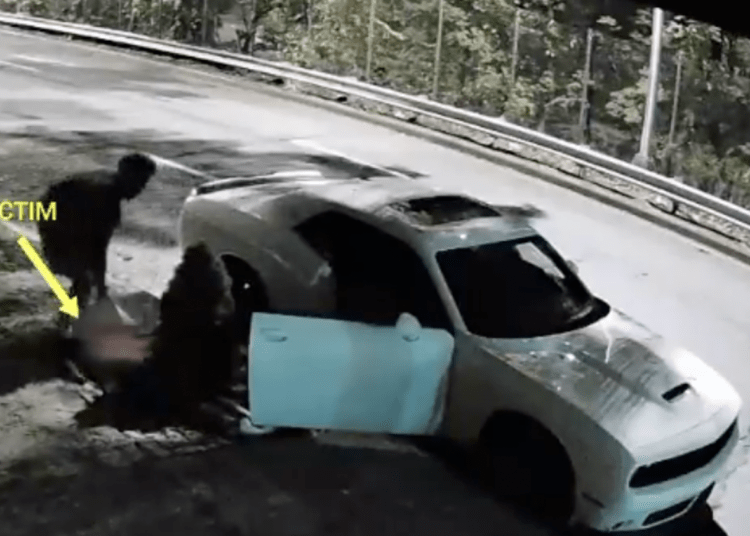 This still image shows a man dumping the body of his pregnant girlfriend on the side of the road in Queens last week. (NYPD)

NEW YOEK — The New York Police Department arrested a man who is accused of murdering his pregnant girlfriend and then dumping her body on the side of the road in Queens late last week.

NYPD took Goey Charles, 29, into custody around 6 p.m. Monday for interrogation and ultimately charged him with second-degree murder in the death of his 29-year-old girlfriend, Vanessa Pierre, officials and a source said Tuesday morning.

A law enforcement source said Charles made “incriminating statements” during the course of the interrogation leading up to his arrest, Fox reported. Additional details regarding the statements were not immediately available.

On Tuesday, NYPD Chief of Detectives Rodney Harrison shared a stunning video that appears to show a man, later identified as Charles, pulling Pierre’s body from the passenger side of a white sedan onto the pavement before closing the door and walking around to the driver’s side, New York Post reported.

On October 23rd in the confines of the 111th precinct, 29-year-old Vanessa Pierre and her unborn baby were found deceased laying facedown on the sidewalk off of Horace Harding Expressway. pic.twitter.com/OiTW0AMzud

Pierre, who was pregnant and had a Hempstead, N.Y., address, was discovered around 6 a.m. Friday lying face down on the sidewalk off Horace Harding Expressway in Queens, Harrison wrote in the Tuesday morning tweet.

Pierre’s body was discovered roughly 15 miles from her home and approximately 17 miles from Charles’ residence, according to information provided by police.

Authorities believe Pierre may have been strangled, after medical personnel found bruising around the victim’s neck, sources said at the time.

She had a sweatshirt wrapped around her neck and was dressed in an orange shirt and red pajamas, with a sock on one foot, the sources said, according to the Post.

Pierre’s cause of death was determined to be asphyxia due to compression of the neck, a spokesperson for the Office of the Chief Medical Examiner said in an email to Fox News.

Charles is expected to appear in a Queens court later today, Tuesday.