The victim had a Thin Blue Line patch on his clothing 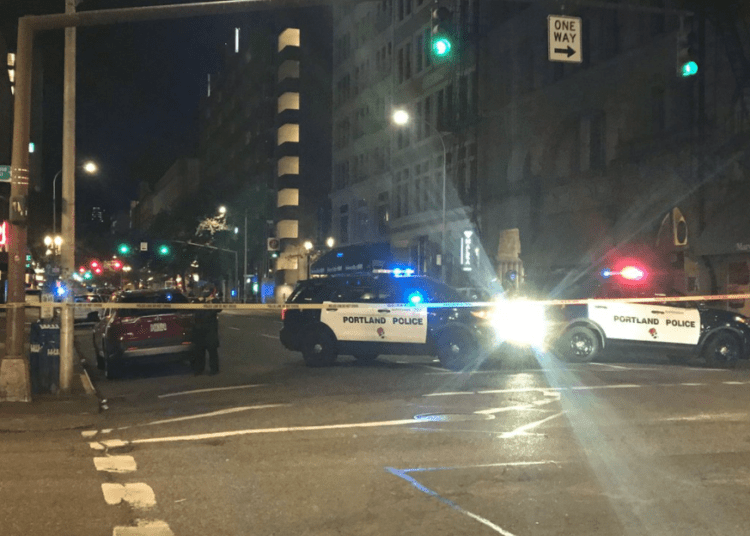 PORTLAND, Ore. — Violent clashes between a massive pro-Trump caravan that drove through Portland, Ore., and Black Lives Matter protesters left at least one person dead in a shooting Saturday evening, according to reports.

Video posted on social media showed a person suddenly dropping to the ground, and others rushing to assist, after what appears to be gunfire near an intersection as vehicles and pedestrians pass by.

Portland police said they were investigating a homicide in the area where the pro-Trump group and counter-protesters clashed. However, they were tight lipped regarding details.

An Associated Press freelance photographer heard gunshots and then observed police medics working on the body of the victim, who appeared to be a white man, according to reports. The freelancer said the man was wearing a hat bearing the insignia of Patriot Prayer, described by its leader Joey Gibson as a “conservative-libertarian” group. Its members have frequently clashed with protesters in Portland in the past.

The shooting victim in Portland had a blue lives patch on his pants. pic.twitter.com/8VsOHnZNeX

Nevertheless, law enforcement authorities have not confirmed details about the person who was killed.

Gibson said he had seen a photo of the man killed. He did not say whether he knew the person, according to OregonLive.

“I have to figure out what the hell is going on,” Gibson said Saturday night.

The man lay in the street as medics tended to the gunshot wounds. The body remained there after EMS left, OregonLive reported. Next to the body was camouflage gear with infidel and Thin Blue Line patches, which would seem to indicate support for law enforcement. Police taped off the area.

The shooting victim in downtown Portland tonight had a side bag with a "blue lives matter" style flag. Many antifa on social media are celebrating his death, even though his ID is not yet known. The shooting suspect is still at-large. pic.twitter.com/1lLxrCl2Uq

Portland Police tell us they are in the early stages of a homicide investigation at SW 3rd and Alder. Officers tell us one person is dead after a shooting. They expect to release more information from here. pic.twitter.com/PiW71rZDJY

“Portland Police officers heard sounds of gunfire from the area of Southeast 3rd Avenue and Southwest Alder Street. They responded and located a victim with a gunshot wound to the chest. Medical responded and determined that the victim was deceased,” the Portland Police Bureau said in a statement.

Several arrests were made prior to the shooting and police advised people to avoid the area as the caravan arrived downtown while a protest was underway.

The pro-Trump rally reportedly coordinated a caravan through Boise, Idaho earlier in the week. Their route remained secret for safety reasons. They encouraged anyone authorized to carry firearms to do so in a concealed manner.

Tensions began escalating to violence earlier in the day when “racial-injustice protesters” confronted the pro-Trump caravan as it drove through the city following a rally at the Clackamas Town Center, according to FOX.

Protesters attempted to stop caravaners by standing in the street and videos from the scene showed sporadic fighting, as well as Trump supporters firing paintball pellets at opponents and using bear spray as counter-protesters threw things at the Trump caravan.

The demonstration marked the third consecutive Saturday that pro-Trump demonstrators and counter-protesters clashed in downtown Portland. The car parade was the largest by far.

The shooting occurred after most of the caravaners had left the downtown area, OregonLive reported.

Portland has seen more than 90 nights of continued protests and rioting in the downtown area and other parts of the city since the May 25 custodial death of George Floyd in Minneapolis.

“We love Jay and he had such a huge heart,” wrote Joey Gibson, founder of the Washington-based group, in a Sunday Facebook post. “God bless him and the life he lived.”