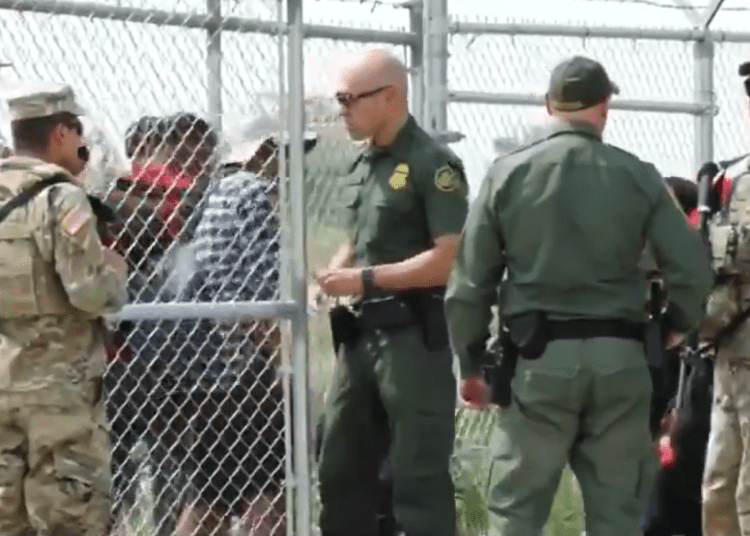 EAGLE PASS, Texas – Under direction of the Biden Administration, Border Patrol agents on Wednesday gave free passage to illegal immigrants as they opened a gate that had previously been locked by members of the Texas National Guard. The move undermines efforts by the state of Texas in order to allow a number of illegal immigrants deeper into the United States.

Correspondent Bill Melugin of Fox News witnessed members of the National Guard close and lock the gate, which is actually located on private property. The effort was to deny people illegal crossing into the interior of the country via a gate that had been previously open.

As the gate was closed and locked, the illegal immigrants were seen standing on the opposite side waiting to be allowed entry as a member of the National Guard stood sentry.

However, a short time later Border Patrol agents appeared with a key and opened the gate, facilitating illegal entry for the migrants who were reportedly processed into the U.S. immigration system, Fox News Digital reported.

As noted, the conflicting incident demonstrates the stark contrast in approach between Texas authorities and Customs and Border Protection (CBP) under the direction of DHS Secretary Alejandro Mayorkas and the Biden Administration.

Under Gov. Greg Abbott, Texas has surged law enforcement personnel and the National Guard to the border in what is called “Operation Lone Star.” The focus of the plan is to dissuade illegal immigration along with Texas erecting its own border wall, which is under way.

NEW: For the first time, we witnessed the TX National Guard close & lock a gate on private property at a major crossing area in Eagle Pass, denying entry to migrants who just crossed illegally & expected to be let in. Border Patrol then came w/ a key & let them in for processing. pic.twitter.com/S1fZaTJnEi

Trying to cope with the overwhelming flow of illegal immigration, Texas has also bussed about 10,000 volunteer migrants to both Washington D.C. as well as New York City.

Furthermore, Abbott has signed an executive order authorizing law enforcement personnel to return illegal immigrants to the border when they are corralled in the interior of the state.

However, these are relatively modest numbers considering there have been nearly 5 million illegal border crossings since Biden took office. This is more than the population of 25 individual states, Alpha News reported.

Many agents have expressed anger at being taken off border protection duties and “releasing criminal aliens into the country,” Law Officer reported earlier this year.

Hence, they’ve been relegated to administrative responsibilities and forced to process those who have entered the country illegally.

“I know the policies of this administration are not particularly popular with U.S. Customs and Border Protection, but that’s the reality, and let’s see what we can do within that framework,” Mayorkas told frustrated agents in January.