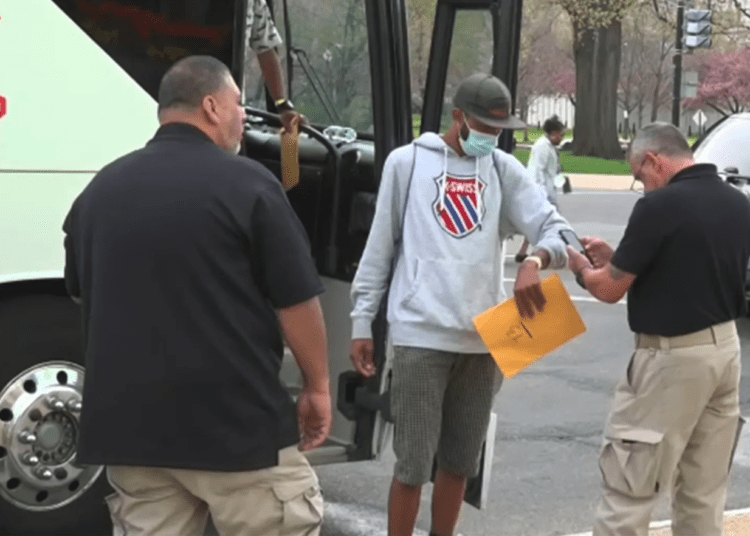 Migrants were bused from Texas to Washington, D.C., where they were dropped off blocks from the U.S. Capitol on Wednesday. (Screenshot Fox News)

WASHINGTON, D.C. – Even though the White House and other naysayers said Texas Gov. Greg Abbott’s plan was a “publicity stunt” or a “gimmick,” the first bus from the Lone Star State arrived in Washington, D.C. Wednesday morning.

Abbott said last week that part of “Operation Lone Star” would include transporting migrants released from federal custody in Texas to the nation’s capital.

The bus pulled up at approximately 8 a.m. just a few blocks away from the U.S. Capitol building. It originated from the Del Rio sector in Texas with immigrants coming to the U.S. from Colombia, Cuba, Nicaragua, and Venezuela, according to Fox.

As the bus came to a stop in Washington, D.C., family units exited together and other individuals disembarked one by one. The passengers checked in with officials and had wristbands removed before being released.

The Texas Division of Emergency Management (TDEM) said Abbott’s plan is working. The agency told Fox News on Monday that many of the communities that originally reached out for support – from the Rio Grande Valley to Terrell County – say the federal government discontinued dropping off illegal immigrants in their jurisdictions following Abbott’s April 6 announcement.

As Abbott promised, TDEM dispatched buses over the weekend to border communities getting overrun with illegal immigrants. They coordinated with officials to identify the individuals.

The Emergency Management agency noted that each bus has the capacity and supplies necessary to carry up to 40 migrants released in Texas communities and transport them to Washington, D.C.

AUSTIN, Texas – Gov. Greg Abbott (R) of Texas says the state will begin to send migrants to Washington D.C. on charter buses and conduct enhanced vehicle inspections at the border in response to the federal government ending Title 42 expulsions next month.

In a Wednesday press conference, Abbott said the Biden Administration’s open border policies have led to a record number of illegal immigrants crossing into the United States. With the announced end of Title 42 expulsions next month, up to 18,000 people may attempt to cross the border every day, NBCDFW reported.

According to the governor, the number of illegal border crossings by the end of the year could exceed the number of people living in Los Angeles.

“It is unprecedented and it is dangerous,” Abbott said Wednesday.

As a result, the governor is enhancing Operation Lone Star, the joint border security effort undertaken by the Texas Department of Public Safety and the Texas Military Department, with new strategies aimed at decreasing the ingress of cartel smuggling, narcotics, and illegal immigration.

Abbott said he is directing the Texas DPS and the state’s Division of Emergency Management to take unprecedented action this month, “to do what no state in America has ever done in the history of this country to better secure our state as well as our nation.”

The first step, according to the bolstered operational plan, is for DPS to conduct enhanced safety inspections of vehicles as they cross the international points of entry into Texas.

DPS Director Steve McCraw said the inspections began Wednesday outside of federal property. He emphasized that probable cause is not needed to detain a vehicle for a safety inspection.

“It’s our job to ensure that every commercial vehicle is safe and the driver is safe as well. If not, we’ll put them out of service,” McCraw said.

However, the more noteworthy move is the governor’s directive to bus migrants to Washington D.C.

Kidd said the state has deployed up to 900 buses in the past for evacuations. He said they will use as many buses as required to follow the governor’s plan.

Abbott said the buses will take the migrants from Texas to the steps of the U.S. Capitol building.