A pro-Trump rally member was violently attacked during the showdown 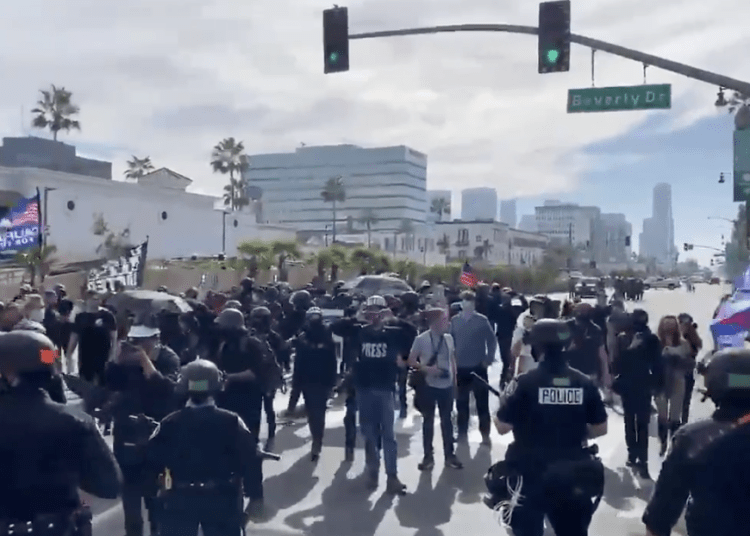 FOX 11 Anchor Christine Devine drove past the area. She said she saw lots of cars arriving to show support for President Trump.

However, a group of protesters, mostly clad in black, invaded the site of the rally.

According to BHPD, about 40 members of an anti-Trump group marched from Roxbury Park to the intersection of North Beverly Drive and Santa Monica Boulevard, Fox 11 reported. The anti-Trump group confronted a couple of participants from a nearby pro-Trump rally and a fight ensued, BHPD said.

The fight injured a Trump supporter and police issued the unlawful assembly advisory for those gathering at the intersection where the fight took place, BHPD said.

“A couple of the members got into a violent attack on a pro-Trump member. It was at that point that an unlawful assembly was declared,” Lt. Max Subin of BHPD told Fox News.

The pro-Trump protester had injuries to his face and was treated by the Beverly Hills Fire Department.

Counter protesters have arrived and BHPD in riot gear form a line between the rally pic.twitter.com/uY5XPJ7EYK

Another video posted on Twitter shows police forming a line and ordering protesters to disperse.

After a fight breaks out, BHPD sets up a skirmish line at Santa Monica and Beverly. They announce the crowd has 30 minutes to leave the area. pic.twitter.com/aX5b0lnP3C

The Beverly Hill Police Department was already on high alert Saturday before the counter-protests began.

“Beginning on Halloween and through Election week, the Beverly Hills Police Department (BHPD) will be on full alert throughout the residential and business districts,” BHPD said in a news release Oct. 23. “Additionally, other law enforcement personnel and private security companies will offer support and coordinate closely with BHPD.”