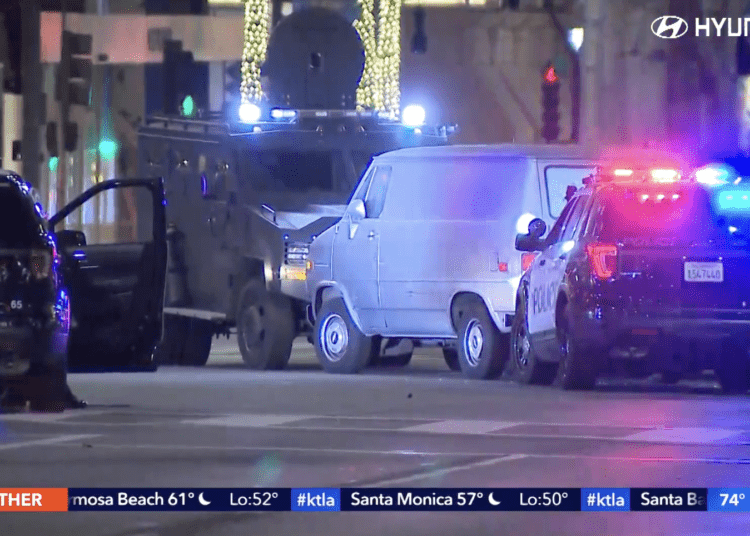 BEVERLY HILLS, Calif. — The Beverly Hills Police Department was engaged in a lengthy traffic standoff with a non-compliant motorist at a busy intersection. After more than five hours, authorities found the man unresponsive. He was later pronounced dead at the scene, authorities said Sunday.

The Beverly Hills Police Department received several calls shortly after 6:00 p.m. on Saturday regarding a van causing a traffic hazard, according to Lt. Giovanni Trejo, the Los Angeles Times reported.

“Arriving police units located a van blocking the eastbound lanes of Wilshire Blvd at Linden Drive,’’ Trejo said. “Police officers attempted to communicate with the driver at which time he drove off eastbound on Wilshire Blvd with police units following closely behind.’’

With officers trailing the van, the driver began to run a red light at Wilshire Boulevard and Rodeo Road. Suddenly, the vehicle came to an abrupt halt within the intersection, the lieutenant said. The vehicle operator briefly exited the automobile, yet quickly re-entered after seeing police units behind him.

Sgt. Green said patrol units pinned the vehicle in place, according to KTLA.

“The driver then made clear attempts to secrete himself inside the van by placing aluminum foil and other items on the windows,’’ Trejo said.

“After a long unsuccessful period to communicate, SWAT officers entered the van and located an unresponsive lone male,’’ Trejo said. “The male was treated by Beverly Hills Fire Department paramedics and later declared deceased at the scene.’’

The man’s identity was not disclosed and there were no further details immediately available.

Armed suspect taken into custody after standoff outside NYPD precinct