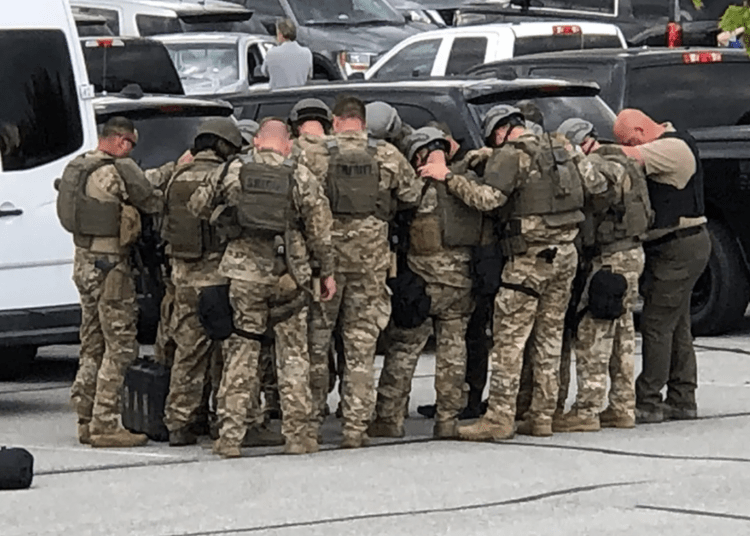 Officers praying at a staging area near the scene of the standoff. (Twitter @MorganFOX46)

Authorities said two deputies died in the shooting that prompted a daylong standoff Wednesday that dragged into the night with law enforcement officers surrounding a home.

Reporter Dave Faherty spoke with Watauga County Sheriff Len Hagaman Thursday morning and he said two deputies, as well as the suspect and the suspect’s mother and stepfather, had died. The suspect’s name has not been released.

Breaking Boone- sheriff Hagaman just spoke with us confirming the second deputy has died. They also found the suspect’s mother and stepfather deceased. Police had been to the home over the weekend. The latest on the investigation today at noon, 5pm and 6pm. pic.twitter.com/uV0WlhTnOX

The sheriff confirmed on Thursday that Fox died at the scene, WSOC-TV reported.

Hagaman said that deputies had been to the home over the weekend but it was unclear why.

BOONE, N.C. — A 13-hour standoff at a home in Boone, N.C., ended after one sheriff’s deputy was killed and another wounded. The suspect appears to have killed himself late Wednesday night. A name has not been released, according to the Morganton News-Herald.

In a 9 p.m. update Wednesday, roughly 10 hours after police issued a shelter-in-place order to local residents, Watauga County Sheriff Len Hagaman identified Sgt. Chris Ward as the deputy who was airlifted to a hospital in Johnson, Tenn., and later succumbed to his injuries. The second, identified as K9 Deputy Logan Fox, was still inside the home where an armed person has continued to “periodically” fire at police who have surrounded the building and evacuated the neighborhood. Authorities have yet to provide another update on Fox’s condition.

BREAKING: unfortunately Sgt. Chris Ward died after he was flown to the hospital. Deputy Logan Fox remains at the scene, but his condition is unknown. The shooter is still barricaded inside, periodically firing his gun toward officers. #Boome #Watauga

Images posted to a Facebook profile under Ward’s name and job description show a collection of black-banded police badges in honor of other deputies who were killed in the line of duty in the state. One of them was fellow Watauga County Sheriff’s Deputy William Ronald Mast Jr., 23, who was ambushed while responding to a call in 2012, FOX News reported.

Under a recent photo of himself in uniform, Ward’s friends commented, “Be careful please,” and “Love you buddy be safe.”

Neighbors who had been evacuated were reportedly cleared to return home before midnight.

There was a procession down Highway 421 early Thursday in honor of the fallen deputy. Flags were lowered to half-staff outside the Watauga County Sheriff’s Office, WSOC-TV reported, and a memorial of candles, flowers and photos was growing outside the building.

One of the neighbors who evacuated just told us he’s just been cleared to return home.

Officers in Watauga County have been involved in a more than 13-hour standoff, where two deputies were shot— one killed.

“This is an incredibly tragic situation and our thoughts and prayers are with everyone involved as well as their families and our community,” Hagaman said in a statement. “I greatly appreciate the tremendous support we are receiving from law enforcement agencies across the region and the state.”

Lots to catch you up on overnight. That deadly standoff in Watauga County is now over & there’s a growing memorial outside of the sheriff’s office for Sg. Chris Ward. We’re still waiting for an update on the other injured deputy. My reports from here start on @wsoctv at 4:30am. pic.twitter.com/jiQYxsQ8Gd

What began as a welfare check turned violent around 9:44 a.m. Wednesday when deputies who entered the home in the Browns Chapel area were fired upon, the Watauga County Sheriff’s Office said in a statement. Deputies were dispatched after the homeowner and his family did not report to work or answer telephone calls.

When the deputies arrived, they found all of the family’s vehicles outside. As a result, they entered the home and were met with gunfire from an unidentified shooter. Two deputies were hit, according to the sheriff’s office. Consequently, authorities issued a shelter-in-place order for the community around Hardaman Circle, about 115 miles northwest of Charlotte.

Police departments from across the state arrived Wednesday to lend their support to the Watauga County Sheriff’s Office, including state police and SWAT operators, officers from multiple departments and deputies from neighboring counties. North Carolina’s State Bureau of Investigation took over the scene Wednesday night, FOX reported.

The parking lot here at Mount Vernon Baptist Church is gradually filling up. As far as we’re aware, the standoff is still ongoing. #Boone pic.twitter.com/yUsVtr5005

Residents were warned to close and lock their doors and windows and shelter inside.

Video from the scene showed that police had blocked off Chapel Hills Road. Authorities had converted a nearby parking lot at Mount Vernon Baptist Church into a mobile command center as they worked to secure the area.  Rev. Todd Houston said the church parking lot was hosting a coronavirus vaccine clinic early Wednesday when the standoff began and more law enforcement arrived.

Photos also showed deputies bow their heads in prayer at the scene of the standoff as it was ongoing.

The nearby Mount Vernon school also ordered a lockdown, although parents were allowed to pick up their children.

Police said they evacuated nearby residents and surrounded the home.