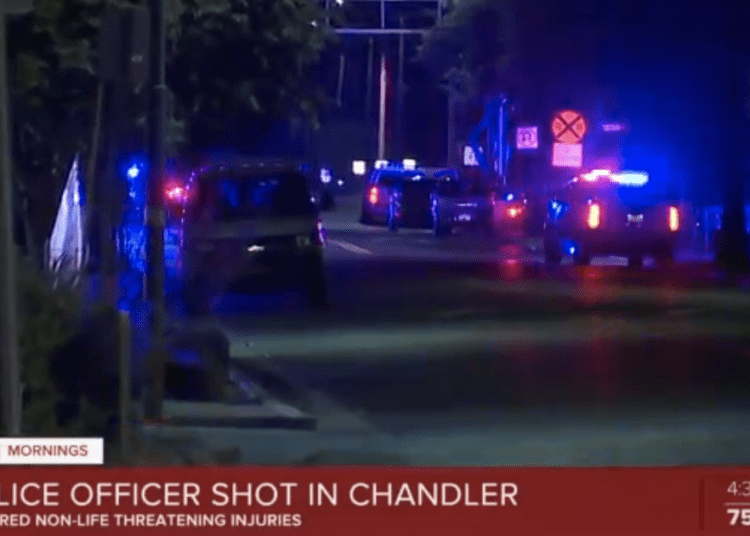 CHANDLER, Ariz. — A suspect has been arrested after shooting three officers in Chandler Monday morning and hiding inside a home, police say.

Video from the scene shows the house on fire after the suspect escaped and ran to a nearby apartment complex where he was later arrested, ABC 15 reported.

An officer was attempting to make contact with a suspicious person when the suspect ran. The officer pursued the suspect on foot and the suspect pulled out a firearm and fired multiple rounds at the officer.

One bullet struck the officer’s lower body, causing non-life-threatening injuries. The officer was treated at the hospital and has since been released, police say.

A home in the area was also struck by gunfire, but no other injuries were reported.

Around 7:30 a.m., residents were again asked to shelter in place after more shots were fired in the area. Officials confirmed that two additional officers were shot and taken to the hospital. The unspecified injuries were not believed to be life-threatening.

Officers returned fire during the incident but it’s unknown whether the suspect was injured.

According to reports, the suspect was barricaded inside a home, which was surrounded by police for several hours.

Around 1 p.m. Chandler police said the suspect was taken into custody after fleeing to a nearby apartment complex, ABC 15 reported.

Authorities told residents in the area to shelter in place while the situation unfolded and was lifted shortly after 1 p.m.

Officials say if any residents have video near the location to contact police at 480-782-4130.