Riots have broken out all over the country 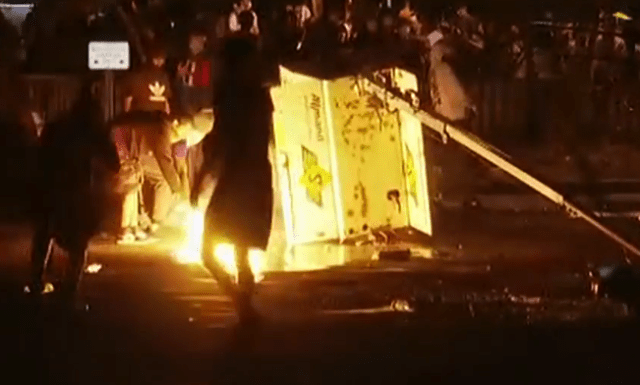 We’ve come a long way in the past seven days. Last week many people were still condemning those who demanded the right to re-open businesses and begin the process of returning to “life as normal” as we’ve combatted coronavirus.

This week “social distancing” seems to be ancient history as protests and riots have broken out across the country over the custodial death of George Floyd in Minneapolis. As a result, “life as normal” will never be the same for thousands of people who had nothing to do with the incident in Minnesota.

Note to NBC News: These are riots even though you would like to call them protests.

Regardless of your perception of the Floyd death in Minneapolis, it’s being handled. Four officers have been fired, the state and feds are investigating, one former cop has been arrested, yet that is not enough for the angry mob.

“We tried the way of MLK for a long time, now we’re going Malcolm X,” said one rioter in Minneapolis.

Unless four cops are given the death penalty—like yesterday—it doesn’t appear to be enough. Even then, I’m not sure that would satisfy many bloodthirsty individuals.

Sadly, police are walking on eggshells, everywhere. They are afraid to take an assertive approach at preempting riotous behavior for fear of being branded as “intolerant,” or worse yet, “racist.”

The riots—loss of life and mass property destruction—have been well documented in Minneapolis, where the appeasing mayor handed out masks to ensure rioters were protected from coronavirus. … The delusional mayor is also blaming out-of-state culprits for the riots, regardless of arrest data showing 86 percent of those taken into custody are from Minnesota and metro Minneapolis.

Nevertheless, the mayhem and destruction is occurring all over urban-America.

Riotous behavior in Oakland has led to a drive-by shooting at the Ronald V Dellums Federal Building, killing a federal officer at this location, Law Officer reported.

An angry mob of rioters turned its rage on a Fox News crew early Saturday, chasing and pummeling the journalists outside the White House in a harrowing scene captured on video.

Veteran reporter Leland Vittert was covering protests in Lafayette Park just before1 a.m. with three crewmembers when as many as a dozen masked protesters surrounded them, in footage caught by the Daily Caller.

Moreover, the White House was locked down as rioters attempted to breach the front gate, Law Officer reported.

The College Football Hall of Fame fell victim to looting Friday night during riots in Atlanta.

Atlanta Police Department Sgt. John Chafee said in a statement Saturday that the $68.5 million facility was one the businesses targeted by looters.

“Protesters continue damaging businesses, looting and setting fire to buildings,” Chafee said in a statement obtained by ESPN. “There has been looting at the College Football Hall of Fame … and many other businesses. We are grateful for the assistance being provided by multiple local and state law enforcement partners as we work to minimize the damage being caused by these individuals and to restore order in our city.”

Protesters broke into the College Football Hall of Fame. Glass is shattered and items inside were destroyed. #11Alive pic.twitter.com/rOpzgUhaRV

More than 200 people were arrested in New York, including one person who faces attempted murder charges for throwing a lighted Molotov cocktail into a marked police vehicle that contained four police officers. Furthermore, many NYPD officers were injured in different incidents during the riots.

At a news conference on Saturday morning, Commissioner Dermot Shea said that “countless” officers were hurt and many remained hospitalized, Fox5NY reported.

One person was killed in Detroit as hundreds of people gathered in the city’s downtown nationwide protests turned into riots.

As WXYZ-TV reported, a Detroit Police Department spokesperson said, “A grey Dodge Durango pulled up and fired into the crowd, striking a 19-year-old man.” The shooting did not involve police.

Members of the crowd marched to the Multnomah County Justice Center, which houses the county jail and police headquarters. Video showed several protesters breaking windows. The police department said a small fire was lit in the building.

The Portland Police Bureau later declared a riot in the city and ordered protesters to go home. In a tweet, it said people who did not comply would be “subject to gas, projectiles, and other means necessary for dispersal,” NPR reported.

PPB has declared a riot. The following is closed to all traffic, pedestrians and vehicles: SW Naito Pkwy west to SW 13th Ave is closed from SW Lincoln north to NW Everett St. Disperse now or you will be subject to gas, projectiles, and other means necessary for dispersal.

In Los Angeles, an angry crowd rushed into the streets amid oncoming traffic.

At one point, an officer grabbed a male activist in an attempt to restrain him. After a brief tussle, a throng of protesters pulled the officer to the ground. They descended on the uniformed officer, kicking and hitting him with protest signs. Eventually, a man in civilian clothing pulled the officer out of the melee.

Dozens of people later marched onto the 110 Freeway blocking all of the northbound lanes, NPR reported.

And on and on it goes … from one big city to another, the mob mentality is willing to destroy lives and property in neighborhoods that is in need of safety.

In addition to demanding justice in the Floyd case, “social justice reform,” continues to be the demand. However, in far too many cases, “reforms” have simply led to decriminalizing many crimes, opening prison doors and releasing serious offenders. It hasn’t done anything to improve the quality of life of “marginalized” people groups. And removing cops from inner-city neighborhoods is foolish.

Consequently, criminal opportunists continue to hold America hostage. This is true since their emotionally driven talking points have not been fact checked by the media. As a result, their “arguments” have been legitimized. Sadly, the arguments are based upon fear, not truth. Therefore, they’ve been allowed to loot, shoot, and burn city blocks to the ground as they are “given space” to express themselves, much to the detriment of local businesses and residents in the area.

The same rioter who said, “We tried the way of MLK for a long time, now we’re going Malcolm X,” is in denial about the opportunities and equalities available to African-Americans in 2020 that were unavailable in 1964. Racism exist in every color, and I hate it. Hence, it needs to be challenged and addressed when it’s seen. We need to demand justice when injustices occur, but burning the country to the ground is not protest, it provokes a violent reaction.

I don’t claim to have all the answers. But my heart breaks for business owners and crime victims whose lives get destroyed by the angry mob. It should not be tolerated in society.

Societal order requires citizens following social norms. Violent protests (riots) are not acceptable and they do not change hearts. All this does is make the divide greater than it already is and harms people in the process. Sadly, much of the damage is irreparable.

Courteney Ross, the fiancée of the late George Floyd, said he would not like the chaos that is coming out of his death and that “he would give grace.”