Smoke Bombs Are Being Thrown At Police 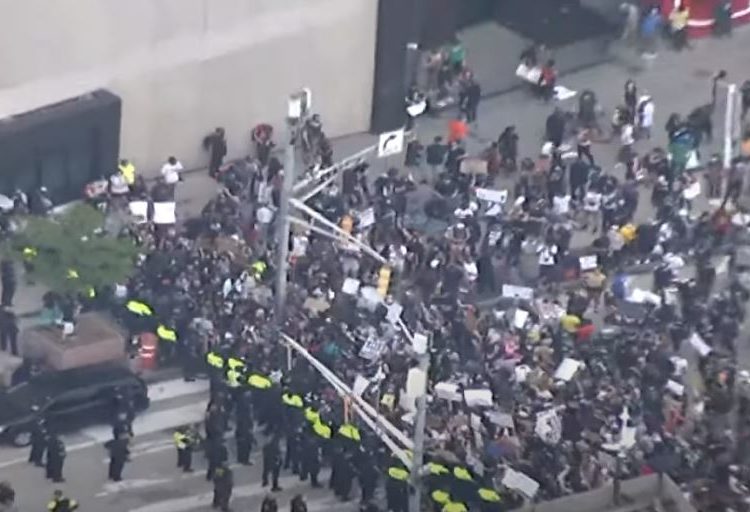 Riots have erupted outside of CNN headquarters in Atlanta in response to Monday’s death of George Floyd in Minneapolis.

The American flag was torched outside the CNN Center and the front glass of the building was breached.

Atlanta Mayor Keisha Lance Bottoms was visibly angry at a news conference during the Atlanta protests Friday, telling protesters to “go home” after they became violent and a police officer was hurt.

JUST IN: Multiple police vehicles have had their windows broken in front of the CNN Center in Atlanta. Protests are taking place in multiple cities over the death of George Floyd in Minneapolis. https://t.co/JRfcaA3YuC pic.twitter.com/H4wIZ1xiAI

“What I see happening on the streets of Atlanta is not Atlanta. This is not a protest, This is not in the spirit of Martin Luther King, Jr. This is chaos. A protest has purpose. When Dr. King was assassinated, we didn’t do this to our city,” she said. “If you want change in Amerca, go and register to vote … that is the change we need in this country.”

.@CNNValencia and crew take cover after an explosion takes place in the space between protesters and police at the CNN Center in Atlanta. https://t.co/zNw4zkkYxP pic.twitter.com/WQmT35ucab

She added: “If you care about this city then go home.”

Smoke bombs and numerous objects were thrown at law enforcement as they stood inside the building.

Phone died, biked home as chants of "Fuck CNN" from protesters grew from across the street from the CNN Center, its Atlanta headquarters. Here's the last video I took. pic.twitter.com/qQzG5QL4R7

The Atlanta Police Department has a precinct inside the building.