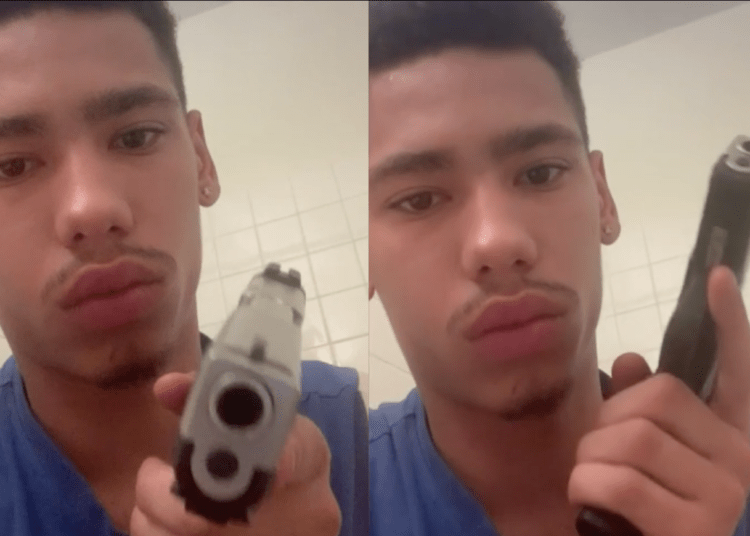 Daunte Wright takes a selfie recording while brandishing a handgun prior to a robbery. (Screenshot Fox News)

BROOKLYN CENTER, Minn. — Daunte Wright was unintentionally shot and killed by former Brooklyn Center Police Officer Kim Potter in April when she apparently intended to deploy her Taser on the suspect fighting to get away from police after they discovered a warrant connected to an armed robbery, Law Officer reported. Now a short video has surfaced showing Wright brandishing a firearm just prior to the crime, which occurred in 2019.

Wright, 20, recorded a 13-second selfie video while he’s toying with a firearm in a woman’s bathroom shortly before he reportedly shoved it in her face and robbed her, Fox News reported. Law enforcement authorities found the incriminating footage on his phone during their investigation, according to court documents.

Wright and an 18-year-old co-defendant friend were charged with aggravated robbery in December 2019 after he allegedly directed the barrel of the weapon at the woman, reached into her clothing, choked her, and demanded she surrender $820 in cash he knew she had tucked into her bra to pay her rent.

Wright was later accused of violating the terms of his release in the robbery case, which led to the warrant for his arrest that was discovered by Brooklyn Center Police when they stopped him for unrelated traffic infractions on April 11.

Police bodycam video shows a non-compliant Wright breaking free from an officer’s grip, jumping back into his vehicle and try to flee before Potter shouts, “Taser, Taser,” and shot him with her firearm. His death prompted weeks of protests and led to first- and second-degree manslaughter charges against the officer, who resigned days after the shooting.

Imran Ali, the assistant criminal division chief at the Washington County Attorney’s Office, wrote in a resignation letter that “vitriol” and “partisan politics” made it difficult to pursue justice.

The co-defendant, Emajay Driver, had gone to high school with the female victim. He was invited to her apartment the night before at around 10 p.m. He brought Wright with him, according to the police report.

The victim shared the apartment with another female. The group of four drank and smoked pot until around 2:30 a.m., when the young women asked Wright and Driver to leave, according to court documents.

When Driver and Wright claimed they didn’t have a ride, the victim allowed them sleep on her floor, Fox reported.

The next morning, her roommate gave her half of the rent. The men saw her tuck the cash into her bra.

According to the police report, Wright told Driver they should “hit some stains,” slang for robbing people, that day.

Once the female roommate left for work, Wright and Driver remained behind and tried to rob her but left empty-handed. The two men were taken into custody five days later.

Furthermore, Wright later violated the terms of his release by allegedly waving a handgun in public in Minneapolis.

When Brooklyn Center Police pulled him over in April, they found a warrant for that incident and tried to arrest him.

Police bodycam video shows Wright surrounded by officers when he violently broke away and tried to flee by jumping into the driver’s seat of his car and shifted it into gear.

“Taser! Taser!” Potter yells in the video, although she drew her firearm and discharged a single round. The car careened and crashed a short distance away. Wright died and a passenger was injured.

Potter has steadfastly maintained that she meant to use her Taser.

Wright’s estate also faces a pair of posthumous civil lawsuits alleging that he shot two other people. In one of the lawsuits, a mother claims Wright shot her teenage son in the head in 2019, Law Officer reported.

Jennifer LeMay, alleges Wright “shot and badly injured” her son Caleb Livingston in May of 2019, “to the point where he is alive but has no function” as reported by CBS Minnesota.

LeMay says Livingston, 18 when the lawsuit was filed in Hennepin County earlier this year, was once friends with Wright, but they had a “falling out,” culminating with Livingstone beating up Wright in front of a group of people in May of 2019.

The mother alleges Wright then retaliated by shooting Livingston outside a Minneapolis gas station. She is seeking more than $50,000 from Wright’s estate. The lawsuit says the shooting remains an open investigation.