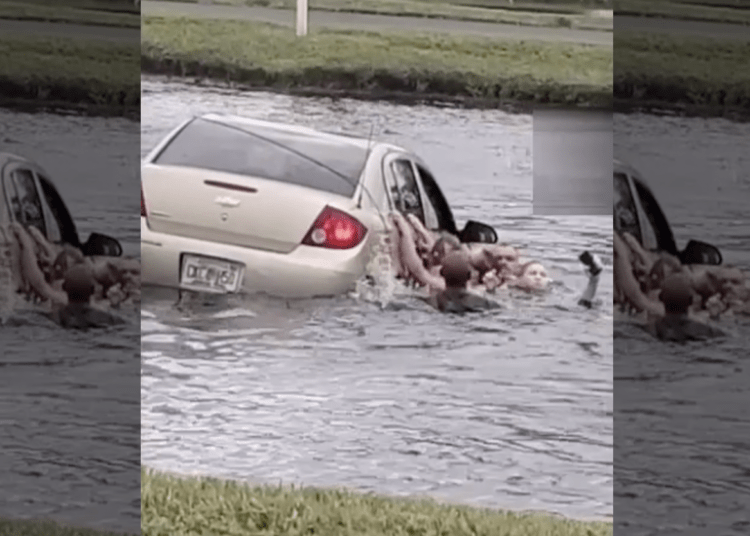 PORT RICHEY, Fla. –  A vehicle pursuit in Pasco County turned into a rescue after the suspect fleeing from law enforcement motored into a pond, leading to the rescue of two young children from the car who could not swim.

The Pasco County Sheriff’s Office said a deputy tried to get the suspect’s car to stop for a vehicle code violation Thursday. However, Jonathan Deloach, 30, failed to yield and tried to evade the deputy, turning off U.S. 19 in Port Richey.

According to deputies, Deloach drove down San Marco Drive into the Ja-Mar mobile home park, but the road was a dead end. The driver lost control around a curve, crashing into the neighborhood’s pond, Fox 13 Tampa Bay reported.

Pasco County deputies responding for the pursuit switched gears to help as a passenger, a woman climbed out of the car along with two children.

Tahree Williams works in the neighborhood. Williams and several neighbors saw the action unfold right up until the car flew into the pond and began to sink.

Video from a neighbor shows Williams responding to help.

“They were scared. The boy, he couldn’t swim, and he was just like in shock. And the little girl, I know she was just traumatized from it,” said Williams.

Deloach was taken into custody. He was booked on charges, which included child abuse, possession of methamphetamine, driving with a suspended license, fleeing to elude and reckless driving.

“Actually one of the deputies mentioned that when they were pulling the driver out of the vehicle, a bag that ended up containing  meth was floating in the vicinity of the driver,” said Amanda Hunter, a spokesperson with the Pasco County Sheriff’s Office.

People who try evade law enforcement frequently have warrants for their arrest. This case was no different.

According to the arrest report, Deloach said he tried to get away because he had three outstanding warrants related to narcotics, Fox reported.

“Kids have a life to live too. They didn’t make that choice to drive reckless from the police, and so they need to live their life too,” he said.