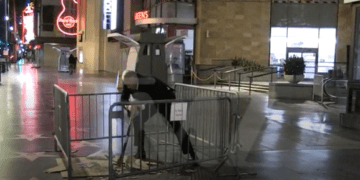 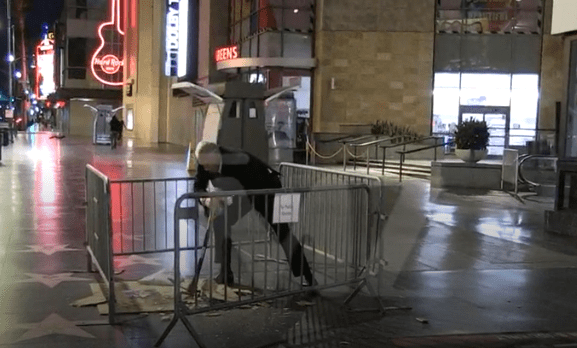 A vandal is busy taking a pickax to President Trump's star on the Hollywood Walk of Fame. (Screenshot TMZ)

HOLLYWOOD, Calif. — President Donald Trump’s star on the Hollywood Walk of Fame has been destroyed once again, but this time the vandal turned himself in.

According to TMZ, the individual is reportedly James Otis. Otis, who has previously attacked the star “multiple times,” took a pickax to it Friday. Just four weeks ago, Otis dressed up in a Hulk costume and smashed the star.

This time the star was covered with plywood and had fencing around it but that didn’t stop Otis, who dressed in a suit for the occasion.

Right after he completed the deed, Otis reportedly surrendered to authorities and is being booked for felony vandalism, which he has previously been booked for.

According to the New York Daily News, an emailed press release said the incident is meant to “dramatize Trump’s policies of income inequality and the enormous damage that this president has done to our American way of life.”

Otis was first arrested in February 2017 when he pled no contest and was sentenced to three years probation, community service, and had to pay a $4,400 fine.

Trump’s star on the Walk of Fame has been a magnet for vandalism since the president announced his candidacy for the White House.

The West Hollywood City council unanimously passed a resolution in August 2018 to have the star permanently removed, but the Hollywood Chamber of Commerce, which has direct authority over the Walk of Fame, refused, according to Fox News.

Trump received his star in 2007 for producing the Miss Universe beauty pageant.